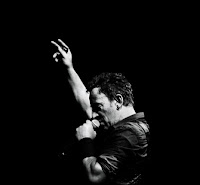 I was 15 years old when “Born in the U.S.A.” was released, and even those of us in Canada couldn’t evade its impact and allure.  This was also the era of the emerging ubiquity of the music video, so Courtney Cox’s cameo in the “Dancing in the Dark” video is forever emblazoned on my memory.

I’m nothing close to a Springsteen “fan,” however; and yet David Remnick’s recent New Yorker profile  was captivating.  What’s not to love about a working class Jersey guy who reads Dostoyevsky?

The dynamics of his relationship with his father–and its impact on his creativity–is compelling, and I’m sure has a kind of universal resonance.  As Springsteen frames it at one point:

“T-Bone Burnett said that rock and roll is all about ‘Daaaaddy!’ It’s one embarrassing scream of ‘Daaaaddy!’ It’s just fathers and sons, and you’re out there proving something to somebody in the most intense way possible. It’s, like, ‘Hey, I was worth a little more attention than I got! You blew that one, big guy!’ ”

But it’s his long-time bandmember Steve Van Zandt who offers an analysis of their generation that was almost epiphanic for me.  Talking about Springsteen’s tortured relationship with his father (a product of that proverbial “Greatest Generation” that endured WWII), Van Zandt observes (warning: mature language ahead):

“The torture we put these poor guys through, when you think of it now. My father, Bruce’s father—these poor guys, they never had a chance. There was no precedent for us, none, in history, for their sons to become these long-haired freaks who didn’t want to participate in the world they built for them. Can you imagine? It was the World War Two generation. They built the suburbs. What gratitude did we have? We’re, like, ‘Fuck you! We’re gonna look like girls, and we’re gonna do drugs, and we’re gonna play crazy rock and roll!’ And they’re, like, ‘What the fuck did we do wrong?’ They were scared of what we were becoming, so they felt they had to be more authoritarian. They hated us, you know?”

I’m sure the gist of that has been said a million times before, in a million different ways, but it just caught me short in a way that was revelatory.  The insight is probably more perennial than we realize.

Remnick’s profile also confirms the way that David Brooks has invoked Bruce Springsteen.  I’m thinking particularly of Brooks’ 2009 column, “The Other Education,” in which he recounts the sentimental education he received by immersing himself in Springsteen’s lyrical universe and concert energy.  “Over the next few decades,” Brooks noted, “Springsteen would become one of the professors in my second education. In album after album he assigned a new course in my emotional curriculum.”

This is no accident.  Springsteen playfully and ironically confesses as much to Remnick.  When he emerges from the dressing, he snaps into a posture in which he challenges the audience: “‘Are you ready to be transformed?’ What? At a rock show? By a guy with a guitar?  Part of it is a goof, and part of it is, Le’s do it, let’s see if we can.”

Or as he sings it in “No Surrender”: “We learned more from a three-minute record, baby, than we ever learned in school.”