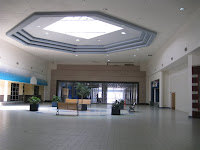 A friend pointed me to this article on the “Mall-ification of America”–which dovetails with my analysis of the mall’s liturgies in Desiring the Kingdom, particularly highlighting the assimilation that happens when we naively adopt what we (wrongly) think are “neutral” forms. Consider these concluding paragraphs:

There is some data to go on, though: According to the 2008 Hartford Institute survey,47% of megachurch income typically goes to employee salariesand benefits, compared to 13% for missions and benevolence. According to Leadership Network, a Christian nonprofit, pastor salaries in megachurches can reachas high as $400,000 a year. The IRS monitors salaries and specifically prohibits shareholder-like pay for ministers and church employees. Still, popular personalities regularly command higher salaries.
Churches maintain that monetary growth is just a means to the end of gaining new converts, not the other way around. On its website, Southland writes: “Some say, ‘We don’t need more churches. We’re only draining the rolls of other churches.’ Our hope is that we’re draining the rolls of hell. More locations provide more opportunity for evangelism.” For churches like Southland, paintball courts and letters to Britney are ultimately good because they help bring more people to God. Malls, similarly, are tools that bring in more members. But at what point does embracing commercial culture change one’s religious message? While holding services in a renovated Dillards might not affect how worshipers see Jesus, giving away flat screen TVs and cars to new attendees as prizes on an Easter Sunday “egg hunt” probably does. (The hunt, hosted by Bay Area Fellowship of Corpus Cristi, TX, also served as a casting call for a new season of MTV’s reality show “Made.”) Even when they become shells of their former selves, malls’ pasts never completely disappear, as Summer Grove’s recycled mall Christmas decorations suggest.
Whether you fasten on a steeple or add a glass facade, Americans remember malls as childhood fantasy lands, where they could meet Santa Claus and play with any toy. Perhaps it’s not a bad bet, then, that as adults, they might come back to meet Jesus.

Imagine the “Jesus” they’ll be meeting.