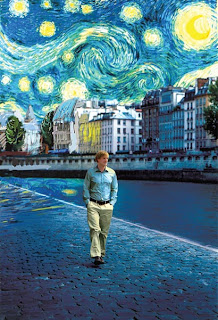 Woody Allen’s “Midnight in Paris” could be co-opted as an interesting little parable for Christian theology and certain sensibilities within contemporary Christianity.

The story centers around Gil Pender (played by Owen Wilson): a writer who’s sold his soul to Hollywood screenwriting but is now trying to realize his dream of being a “real” writer, that is, a novelist. The story of his novel is centered on the owner of a “nostalgia store,” a shop of memorabilia for those who live in the past–much like the writer, Gil, who idolizes the Paris of the 20s, and more particularly the jazz ages writers who transplanted themselves there: Hemmingway, Scott Fitzgerald, Gertrude Stein, and others. In short, just as the protagonist of his novel longs for a past that would allow him to escape his dismal present, so Gil romanticizes a Parisian past that would deliver him from the doldrums of his stalled book and shallow fiance.
Lo and behold, Gil gets his wish. At midnight, a magical car (just go with it…) transports him back to the Paris of the 20s where he dances with Scott and Zelda, listens to Hemmingway’s minimalist rhapsodies about “courage” and “honesty,” shares his manuscript with Gertrude Stein, woos a lover away from Picasso, and has a delightful encounter with Salvador Dali (played fantastically by Adrien Brody).
He returns each morning to his present–which begins to look even flatter and more banal. But he also returns with new creative energy, an expanded imagination, jolted out of his noncreative stupor. This is what Gil finally realizes: he does come back to his present. He’s never quite tempted to settle into this past Paris of his dreams. The film, at this point, gets a tad didactic and just a bit preachy, but still does a nice job of registering an important critique of nostalgia as a disordered relation to the past. But the rejection of nostalgia does not entail some equally problematic utopianism of future progress, or even some trite “celebration” of the present. No, the rejection of nostalgia can nonetheless recognize creative debts to the past, even the importance of an inventive retrieval for the sake of an imagined future–the imagination of which is dependent upon our forebears.
I’ll resist the temptation Allen falls prey to, viz., telling rather than showing. Suffice it to say that one could profitably read this as a parable that might point up the nostalgic leanings of some theological trajectories, but without reducing all contemporary projects of retrieval as nostalgic. Ressourcement is not nostalgia, but it can be a bit of a gateway drug to such wistful escapism.