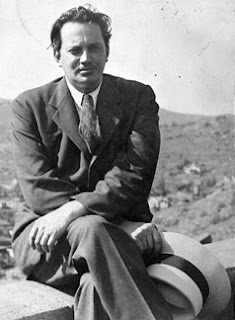 My summer-evening, front-porch reading for the past few days has been the Selected Letters of Thomas Wolfe, edited by his former agent, Elizabeth Nowell. They are charged with the same frenetic energy as his fiction. And given the range from his youth until just a couple of days before his untimely death, they also function as an ersatz autobiography.
Wolfe’s candor and sincerity go a long ways toward making up for his narcissism and insecurity. His account of critics and reviewers will surely resonate with anyone who has taken the risk of putting their thoughts in print (noting “that one of the pleasantest occupations of a great many people in this world is to shoot down a whole regiment of wooden soldiers, and then return triumphant from the wars, saying, ‘we have met the enemy and they are ours'”).
But most interesting are the glimpses into the creative process, the sheer labor of writing, the manic highs and deep lows that attend the process. Wolfe’s work ethic was impeccable–none of this “waiting for the muse” mythology, sitting around waiting for inspiration. Wolfe was a workhouse of a writer, a lunchbox creator who punched the clock of discipline. But he also notes an aspect of creation that eludes our control, which amounts to a note of hope for writers:

“And although my conscious mind was busy with all the things and places I was seeing and the people I was meeting, I think my unconscious mind must have been busy at my book, because now that I am back, the whole plan, from first to last, has become clear to me, and I think I know exactly what I want to do.”