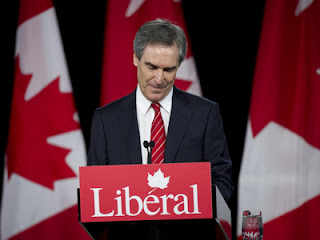 You might not have known this, but the nation to our north just completed a federal election. Not a lot of hype–the election was only announced about 5 weeks ago, so don’t feel badly if you missed it. The Conservative government established a solid majority, thus relinquishing the ball-and-chain of a coalition government. No big surprise: they only called the election because they were confident this would be the outcome.

The real story of the election was the trouncing of the Liberal party and the re-emergence of the NDP–what used to be the “left” option in Canadian politics but which has now, it seems, gone the way of “New Labor.”
Why should we care? Because embedded in the downfall of the Liberals was a cautionary tale about the role of intellectuals in electoral politics. The leader of the Liberal party was philosopher Michael Ignatieff, about whom I’ve blogged before. A political philosopher of international renown, Ignatieff returned to Canada like the philosopher returning to the cave, committing himself to the actual task of governing. The end result was the complete obliteration of the party.
Andrew Potter’s Maclean’s column, “No Country for Good Men,” is an instructive analysis. He points out two important factors:
First, the Liberal party has not known what it stood for since Chretien–its only “platform” has been the maintenance of power. This isn’t even pragmatism; it’s ultimately cynicism. As Potter notes:

the Liberal Party of Canada is a complete disaster, and has been for some time. It was mid-way through Jean Chretien’s second term that people started to point out that the party had no real identity, no sense of purpose other than power for its own sake. And so Michael Ignatieff’s failure to tell a plausible story about his own candidacy for prime minister was the precise mirror of the party’s own existential conundrum: The Liberal Party of Canada has no idea why it exists, so it is hardly surprising that they settled on a leader who didn’t seem to have any idea why he was here.

What is so remarkable about Ignatieff’s tenure as Liberal leader, and with this past election campaign in particular, is how little he tried to take advantage of intellectual strengths and interests. Confronted with a cartoonishly small-minded prime minister acting as chief puppeteer over a caucus of frat boys, yes men, and idiocrats, surely there was an opportunity for a leader who would speak to those Canadians who see themselves as responsible citizens of the world. We spent much of the 2000s telling ourselves that “the world needs more Canada”, and if anyone embodied that slogan, it was Michael Ignatieff.

But while Ignatieff and his handlers failed to communicate a clear vision, and take advantage of his intellectual strengths, Potter also makes a disheartening observation about the Canadian electorate–one sadly confirmed, I have to admit, as I regularly return to Canada as an ‘oustide’ observer:

Why did Michael Ignatieff – or more plausibly, the people helping devise his political brand and their electoral strategy – stay as far as possible from these issues? Probably because they believe that Stephen Harper actually has us pegged, that we are a nation of Tim Horton’s-addicted moral suburbanites for whom that “the world needs Canada” was always just a slogan for selling books and lattes to the elites downtown. But if the Liberals are afraid to speak to their natural constituency in their native tongue, and if their leader’s CV is largely a cause for quiet embarrassment, what does that say about the party, or the country?