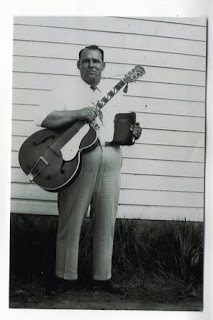 NPR’s All Things Considered had a marvelous little segment on Brother Claude Ely, a backcountry Pentecostal preacher who’s probably impacted you more than you might realize.

You probably already know some of Brother Claude’s work if you’ve heard Johnny Cash’s haunting rendition of “Ain’t No Grave” on American VI, or if you heard it playing in the background of this year’s Deadliest Catch trailer–a song Ely wrote when he was 12 years old and miraculously healed. The NPR piece, featuring his nephew’s quest to know the man, includes some fantastic archival recordings (including a recording of the night Ely died leading a revival from the organ–he died with his boots on, so to speak).

[Tulane scholar] Fontenot says that it might be hard to tease out where different musical traditions come from. But he believes that Pentecostal music had an impact on rock ‘n’ roll. He says you can hear that impact in Brother Claude Ely’s music.

Many of the early rockers — Elvis Presley, Jerry Lee Lewis, Carl Perkins, and Johnny Cash — all grew up in the Pentecostal church, according to Hensley.

Be sure to listen to it: just reading the story doesn’t begin to do it justice. It’s a convincing audio portrait in which you’ll hear the later music of Presley, Cash, and Lewis prefigured in Pentecostal worship.