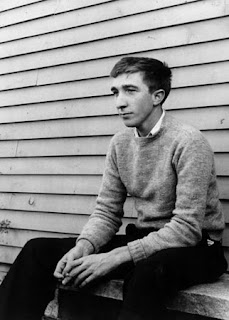 There have been some wonderful tributes to Updike around the horn, but I think my favorite feature so far has been the Guardian‘s moving montage, “John Updike: A Life in Pictures,” a chronological journey that well captures Updike’s charm and humanity.

But I thought Nicholson Baker’s terse, profound comment on NPR best captured the sense of what we’ve lost: “It’s just shocking when a very intelligent person is no longer looking out at the same world that you are.”

That took me back to Baker’s U and I (1991), his hilarious, self-absorbed-yet-generous, back-handed homage that chronicles a young writer’s obsession with the elder statesmen (“U” being Updike, and “I” being Baker). Reading the opening chapters on the day of Updike’s death was eerie, as Baker is struggling with whether to write an essay on Updike while he’s still alive. Startled and prompted by the death of Donald Barthleme, Baker comes to a realization:

I suddenly got a glimpse of how disassembled and undirected and simply bereft I would feel if I were to learn suddenly through the Associated Press of Updike’s death.

I remember that sensation. It was exactly how I felt upon learning of the death of Jacques Derrida, while engaged in finishing a book entitled Jacques Derrida: Live Theory. And it was exactly as Baker commented: what one couldn’t quite get used to was the fact that one would no longer hear from this writer, no longer get their take on the world we shared. The spigot had been turned off (and goodness knows both Updike and Derrida has voluminous wells and unrestricted spigots). Sure, the archives will for years yield hitherto unseen materials, but these would never be new observations of the world continuing to unfold. And one would have to learn to write of them in a different tense: every present would have to be turned into a past.

Baker’s U and I attests to this in a long meditation on a curious phrase of criticism:

That phrase which reviewers take such pains to include when delivering their judgments–when they say that among living writers so-and-so is or isn’t of the first rank–had once seemed to me unnecessary: the writing, I had thought, was good or bad, no matter whether the writer was here or not. But now, after the news of Barthleme’s death, this simple fact of presense or absence, which I had beun to recognize in a small way already, now became the single most important supplemental piece of information I felt I could know about a writer: more important than his age when he wrote a particular work, or his nationality, or his sex (forgive the pronoun), political leanings, even whether he did or did not have, in someone’s opinion, any talent. Is he dead or alive?–just tell me that. […] The living are always potentially thinking about and doing just what we are doing: being pulled through a touchless car wash, watching a pony chew a carrot, noticing that orange scaffolding has gone up around some prominent church. The conclusions they draw we know to be conclusions drawn from how things are now. Indeed, for me, as a beginning novelist, all other living writers form a control group for whom the world is a placebo. The dead can be helpful, needless to say, but we can only guess sloppily about how they would react to this emergent particle of time, which is all the time we have.

So while Baker was contemplating a posthumous piece on Barthelme, his thoughts turn to Updike: “How fortunate I was to be alive when he was alive!” And the drive to produce U and I stems from an urgency and a hope: “All I wanted, all I counted on, was Updike’s immortality.”