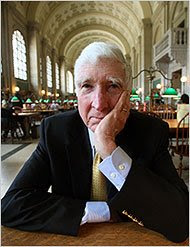 I could only respond in a gasp of surprise upon seeing the news of John Updike’s death. He was, without question, one of America’s great “men of letters,” if you’ll forgive the cliche. I appreciated his fiction and stories (I notice one of my earliest blog posts was on Updike’s Early Stories), some his poetry, and even more so his criticism (just last night I was reading from his latest collection, Due Considerations). But his work for me always had a feel of an older generation without being old enough to seem exotic or distant enough to be a glimpse into foreign worlds–and yet, it also didn’t feel like he was unveiling the world I inhabit. James Wolcott, while recently reviewing The Widows of Eastwick, provided an insightful analysis of how younger generations of writers related to Updike’s towering presence, casting a long shadow over the American literary scene.

And yet I have always appreciated that Updike valued literature as a means of delight. Updike believed in fiction. As he noted in a late piece for “This I Believe” on NPR (included in Due Considerations):

A person believes various things at various times, even on the same day. At the age of 73, I seem most instinctively to believe in the human value of creative writing, whether in the form of verse or fiction, as a mode of truth-telling, self-expression and homage to the twin miracles of creation and consciousness. The special value of these indirect methods of communication — as opposed to the value of factual reporting and analysis — is one of precision. Oddly enough, the story or poem brings us closer to the actual texture and intricacy of experience.

In fiction, imaginary people become realer to us than any named celebrity glimpsed in a series of rumored events, whose causes and subtler ramifications must remain in the dark. An invented figure like Anna Karenina or Emma Bovary emerges fully into the light of understanding, which brings with it identification, sympathy and pity. I find in my own writing that only fiction — and rarely, a poem — fully tests me to the kind of limits of what I know and what I feel. In composing even such a frank and simple account as this profession of belief, I must fight against the sensation that I am simplifying and exploiting my own voice.

In a way, I’m still reeling from this news. It’s surprising how the loss of such a figure can make one feel lonelier, that somehow a conversation has been shrunk, cut short, while there was still much more to say.