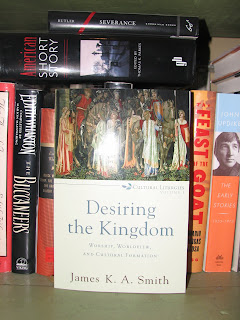 Well, this one was a long time coming. But I just got my first copy of Desiring the Kingdom! The official release date is August 5.

This book has been with me (and with our family, I’m afraid) for several years. In fact, it was just about a year ago that my wife headed up to Canada with the kids, leaving me with an ultimatum: finish the book (there were a number of “or elses” implied, none of them inviting). I camped out in my office for 4 days, finally finishing a complete draft in the first couple of days, and then undertaking the hard work of cutting 20,000 words for the final draft (which still put me 20,000 words over the contracted length!). The good folks at Baker Academic were graciously patient as the project morphed and percolated (and expanded).

In a way, this feels like “my” first book. So many of my other books have been commentaries of one sort or another–explicating, explaining, unpacking and illustrating the ideas of others. But Desiring the Kingdom, while by no means original, feels like its written in my voice, bubbling up from some of my passions.

Of course, now begins the hard part: watching one’s little child be thrown to the wolves in the world of reviews! But in preparation for that, I found this little litany for authors to be helpful! (H/T: Comment‘s Friday Newsletter)

[And yes, the photo above is a lame, narcissistic attempt to see my work alongside Wharton, Waugh, Updike, and Mario Vargas Llosa. Suffice it to say that my bookshelf is the only place in the world where that could happen. The same doesn’t even happen in my imagination.]