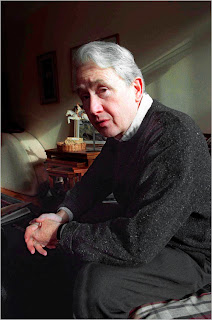 I did not grow up reading books. In fact, I avoided them like the plague as if not reading was some kind of badge of honor. This ridiculous code was absorbed from a combination of “jock” mentality and the “country boy” image we absorbed in my small-village upbringing that was rural in its essence. I didn’t even read the books assigned for school. The only book I can honestly remember reading up to grade 12 was a 1982 edition of Don Cherry’s Grapes: A Vintage View of Hockey.

That changed after my conversion to Christian faith when I was 18. At that point, I became a voracious reader. But I was devouring a very particular strain of “non-fiction” that was a long ways from “creative”–books in biblical studies and theology, and later, works in philosophy. My waking hours were spent trying to inhale all that I could, trying to make up for my readerly sloth up to that point. As I progressed through my undergraduate studies into graduate work, my interdisciplinary interests multiplied my reading obligations but still restrained my universe within a narrow sector of the world of books, a million miles from “literature.” Indeed, during this phase I would have looked askance at a novel as “soft.” I was doing “serious” reading and refused to be distracted by “stories.” Sitting beside the pool I’d be reading Heidegger; on the beach I’d exhibit my “rigor” by reading Derrida; rocking the baby in the basinette I’d be paging through Augustine or Foucault. Little did I realize how small my world was.

Today, almost the exact opposite is true. Reading philosophy and theology is, for the most part, my “job”–an obligation I discharge at the office. I don’t bring those books home. Instead, my home library is filled with Julian Barnes and Evelyn Waugh, Updike and Flaubert, Ted Hughes and Charles Wright. But not until last week had I given much thought to what had changed.

And then it hit me: it was Frank McCourt.

It’s strange: for almost all of the books in my library, I can recall where and when I got them. But for the life of me, I can’t remember how these first two volumes of McCourt’s memoirs made their way to my shelf (Teacher Man was a gift from my mom). I know from the dates inside that I read this in my last year of grad school. What would have prompted me to do so is lost in the sands of my aging memory. And yet, as I try to trace this shift in my reading habits–this expansion of my reading world that took me into the environs of literature–the paths seem to stretch back to Angela’s Ashes as a sort of fulcrum or hinge, a turning point. McCourt’s enchanting style, suffused with the religious in the most sacrilegious ways (all that “wanking!”), coupled with the power of Irish story-telling had me hooked. And his explorations of his own psychic life were, for me, like new adventures in a foreign territory. (Indeed, his persistent description of that experience of a “clouding” of his mind–a dark, swirling interior storm–has stuck with me for years, giving me a picture to name realities.)

All of my “serious” reading to that point had worked with a reductionistic fixation on a certain kind of truth–reading for “information,” for “knowledge,” for propositions and ideas. Not until I dove into McCourt’s memoirs did I come to appreciate the truth of story, the revelatory capacity of narrative, the ability of literature to not only “make up” worlds but to break open our own world. I owe Frank McCourt more than I realized.