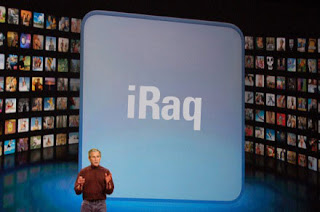 From the completely random file: within just a couple of days I read a long essay on George W. Bush and then several obituaries for Steve Jobs and was struck by similarities in their leadership style–and how differently those similarities were evaluated.

The first essay, “Dubya and Me,” by Walt Harrington, appeared in the Autumn issue of The American Scholar. I think only the most ideologically blinkered would fail to appreciate this intimate portrait of George W. Bush as someone with deep historical curiosity, particularly eager to find exemplars of leadership. One also sees Bush’s swagger, brashness, and aggressiveness, to be sure. But these are recontextualized in this behind-the-curtain portrait. Harrington’s account won’t win any converts amongst the usual suspects of my “progressive” friends–but for those who are less ideologically constrained by partisan devotion, I commend the article for your edification.
But what’s the link to Jobs, who is being virtually canonized in today’s press? (I write as a devoted Mac user–penning this from my Macbook Pro, with my iPhone playing in the docking station and an iPad sitting on the coffee table.) What could the forward-thinking guru from the Silicon Valley possibly have in common with the ‘g-dropping hunter from west Texas?
Well, I was struck by the way that leadership characteristics seen as faults in Dubya are praised as the necessary genius that Jobs brought to Apple. Consider, for example, Joe Nocera’s (reprinted) homage to Jobs in the New York Times, “What Makes Steve Jobs Great,” alongside the Times’ obituary. Both note that Jobs’ management style could border on the draconian: uncollaborative, single-minded, aggressive, and very top-down. He could unleash excoriating criticisms of his employees and was almost maniacally (“insanely”!) concerned with secrecy, flaunting that great liberal ideal of “transparency.” And yet Jobs will be (rightly) praised as one of America’s greatest innovators and entrepreneurs.
What I find curious is that the same traits that are praised in Jobs are held up as vices and character flaws in Bush (not by Harrington, but by oft-trotted-out caricatures that circulate so widely). I note this not to defend Bush or his policies, but only to observe that our evaluation of leadership styles is not some neutral affair: we bring our biases and presuppositions and ideological agendas to our identification of “best practices” and our evaluation of leaders and leadership style. If we canonize St. Steve, we might have to re-evaluate knee-jerk caricatures of POTUS 43.