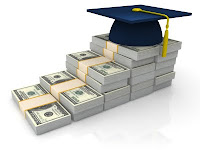 One could easily imagine a college recruiting and marketing department latching onto the quantifiable data compiled PayScale’s College Salary Report. The data paints a picture of starting and median salaries for graduates of over 1000 institutions across the United States. You can view the data by region as well (e.g., the Midwest). PayScale also offers an analysis of “return on investment,” calculating the 30-year return on tuition in terms of salary income over a lifetime. (This latter metric yields some interesting data: for example, while some public universities might be cheaper ‘up front,’ they also don’t offer the same return on their tuition investment as some private colleges with higher tuition.)

However, I would hope that Christian colleges and universities would at least be cautious in employing this data, since it is clearly a way of playing into the hands of economic pragmatism about higher education–one more way to simply treat a degree as a credential for employment rather than as a means for holistic formation of “prime citizens of the kingdom.”
More importantly, this analysis of the data (let’s just assume all the numbers are trustworthy) is simply reductionistic. It doesn’t have room to recognize or absorb the fact that different kinds of institutions envision “success” very differently. To take just an easy example, many Christian and Catholic universities inculcate in their students a deep devotion to service, to the pursuit of justice and shalom. This often translates into social entrepreneurs who devote themselves to NGOs and non-profit agencies concerned with the marginalized and downtrodden. These colleges send into the world graduates who imagine the world otherwise, and who imaginatively launch new organizations, programs, and initiatives that counter hunger, poverty, disease, and illiteracy. These, too, are “successful” graduates, but their work and vocation isn’t going to bump up the median salaries of our alumni any time soon. So be it. We’re working with a different metric.