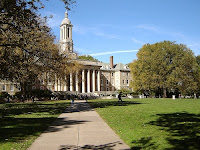 Over at the Immanent Frame today, Jonathon Kahn offers some reflections that grow out of the Teagle-funded initiative, “Secularity and the Liberal Arts.” Kahn’s post, “Reconceiving the secular and the practice of the liberal arts,” is essential reading for anyone involved in higher education–whether at public universities or Christian colleges. The very fact that such a conversation could take place is a testament to shifting paradigms fostered by so much good work sponsored by the Social Science Research Council’s program, “Religion and the Public Sphere.” It is also an indicator that important work by Charles Taylor, Jeffrey Stout, Nicholas Wolterstorff, William Connolly, George Marsden, and others is beginning to trickle-down into wider conversations amongst practitioners.

The context for the project is the demise of secularism (and the death of the secularization thesis) coupled with Charles Taylor’s account of “the secular” not as some neutral, unbiased, universal space, but rather as the fact of contestability. To say we live in “a secular age” is not to claim that we live in an a-religious age but rather to recognize that we inhabit pluralistic cultures where no one set of plausibility structures is universal or axiomatic. Whereas secularism represented the doctrinaire imposition of one perspective as if it were not a perspective, the “secular” (in this new sense) names this contestable, pluralist environment in which we find ourselves in late modernity. (In ways that I’ve already noted elsewhere, Kahn notes that this Taylorian definition of “the secular” overlaps with Stout’s redefinition of “secularization” in Democracy and Tradition as the state of affairs in which we cannot take for granted that our interlocutors share our fundamental starting points.)

In sum, while secularism is well lost, this does not hail the return of theocracy or Christendom: rather, it requires that we recognize we live in a “secular” age, a pluralist space. Secularism is dead; long live “the secular.”

The “Secularity and the Liberal Arts” project sought to explore some implications of this for higher education. In particular, what does the end of secularism mean for those liberal arts colleges that proudly describe themselves as “secular?” As Kahn puts it,

Our “Secularity and the Liberal Arts” group wondered whether, or how, these theoretical moves had made their way onto our campuses. Did the practices and ways of liberal arts life reflect the theoretical work that has been done of late on the secular? We suspected that life on liberal arts campuses, both in and out of class, did not reflect this profound eclipse of the secularization thesis. Our institutions have long valued a notion of the secular that limits and restricts religious expression in order, ostensibly, to promote tolerance and critical thought, to sustain democratic institutions, and to foster civic engagement.

So what would it mean for “secular” liberal arts colleges to jettison their commitment to secularism while still constructing the college as a “secular” space? Could liberal arts education be post-secularist? Kahn summarizes the possibilities:

On these terms, secular institutions such as liberal arts campuses would excel at anticipating and navigating differences among their citizens. What Stout means by “secular, not secularist,” we suggest, is just this. A secularist seeks to rid democratically and pedagogically orientated spaces (e.g., campuses and classrooms) of religious commitments in the pursuit of arrogating authoritative forms of knowledge. Someone who possesses a revalued understanding of the secular as a discursive condition and practice seeks knowledge that helps us, as Stanley Hauerwas describes, “to act wisely in a context of conflict, ambiguity, and change.” When the authority of knowledge is less important than the things that can be done with knowledge (i.e., explicate its logic, argue with it, follow its implications, explore motivations for holding it, and reflect on how it shapes moral formation), the secular becomes a discussion between religious and non-religious citizens who are acutely aware that the demands of secularized democratic life require an extraordinary balance between cherishing one’s own convictions and holding to the awareness that these same cherished convictions are contestable, and that they may at times act as a bludgeon against other democratic citizens.

I want to go on record and say how encouraging it is to see this being articulated. In some ways, the shape of the conversation is getting very close to the sort imagined by George Marsden in The Outrageous Idea of Christian Scholarship. Such “secular” liberal arts colleges would be post-secularist in the best sense, making room for ideas, theories and perspectives rooted in religious and confessional traditions–though it also (rightly) requires religious believers to recognize that we live in a “secular” age–that our religious beliefs are not axiomatic, but contested and contestable.

For liberal arts colleges, the stakes of this question are important. The mission of liberal arts education is not simply the conveyance of certain bodies of information or technical skills that are useful in a market economy. Liberal arts colleges understand themselves as places that promote education as a way for students to consider larger questions of meaning and value. Liberal arts colleges are places where students are not thought naïve to ask so-called big questions: “What is the meaning of my life?” “How do I understand death?” “Does evil exist?” “What are my obligations to my neighbor, my country, my world?” And finally, “How might my education—in whatever field I study—help me assimilate these questions?” We were struck by the way that considerations of the secular had the profound effect of renewing discussions of what might be called the deeper purposes of liberal arts education.

But here we see that even such “secular” liberal arts colleges would not be willing to relinquish a lingering aspect of the Enlightenment liberalism that informed secularism–namely, the sacred autonomy of the student. In short, while I would applaud the move to this sort of “secular” liberal arts education, such a model still refuses to think about education as formation. It’s willing to make room for a variety of “views” and “perspectives” to help students ask “the big questions”–giving them lots of options to consider. But this is largely training them to be spectators and refuses to tell them what they ought to think. Indeed, even the new “secular” liberal arts college will remain committed to a persistent aspect of liberal Enlightenment orthodoxy: an allergy to paideia, to the thick task of formation that constitutes inculcation in a tradition, habituation to a particular vision of the good. (See Alasdair MacIntyre on “The End of Education.”) Even a “secular” liberal arts college remains secularist just to the extent that it remains allergic to the notion of education as formation.

Such a vision of education as formation–not just equipping students with a buffet of perspectives, views, and positions, but rather aiming to shape them into certain kinds of people–that is precisely the more holistic educational project envisioned by the Christian liberal arts college in a “secular” age.