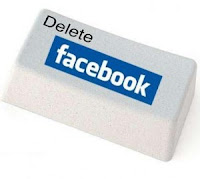 Today I deactivated my Facebook account and submitted the request for its deletion (to stave off any temptation from second thoughts later on). After being a Facebook user for about 3 months, I have decided to leave the FB world. I’ll be sad to be “disconnected” from some of my “friends,” but I’m feeling very good about the decision. So “Farewell, Facebook!”

In the spirit of George Costanza, I want to say, “It’s not you, it’s me.” But I do think it’s at least partly you.

There are multiple factors in this decision. For instance, I finally joined Facebook to stay connected with my son who left for college. But now everything I know about him through Facebook I wish I didn’t! I also find that Facebook has taken away from what blogging I did–and I think blogging is a much better exercise for a writer than dashing off status updates.

But it’s mostly me. Facebook plays into all of my vices: my pride and arrogance, my self-centeredness, my penchant for vainglory. Most of all, Facebook feeds and fuels my addictive personality, especially when it comes to communication. My wife can attest that I was addicted to snail mail before email was even a staple of my life. I have vivid memories of living in our first apartment, waiting to hear the clink of the mail slot, eager to see what would arrive. Indeed, sometimes my lack of patience became so ridiculous I would go to the front of the house and check the box over and over again–not yet? By now? Where’s the mail? And then of course, once the mail was actually delivered, I’d have a kind of postpartum funk for the next few hours. Sad.

This fixation, of course, was completely irrational–most of what came in the mail was, well, not exactly bad news, but also not a check from the lottery either. Nonetheless, I’ve always had an irrationally hopeful attitude toward mail: who knows what opportunity might come through the slot?

Email, as you can imagine, took this to ridiculous new levels, precisely because email can arrive 24 hours a day. You can guess what this does to someone who’s already addictively fixated on snail mail that arrives just once a day. Facebook, of course, just added another layer of fixation on such “connection,” while also creating a quick and easy outlet for expression that is always a veiled cry for attention.

What’s at issue here is precisely the fact that Facebook is an environment of practice which inculcates in us certain habits which then shape our orientation to the world–indeed, they make our worlds. So, in the spirit of Desiring the Kingdom, I started to take a “practices audit” of my Facebook patterns. The results weren’t pretty.

All of this came to a head last night while reading Zadie Smith’s recent review of the movie, “Facebook” alongside Jarod Lanier’s manifesto, You Are Not a Gadget. As Smith notes, in language strikingly similar to my argument in DTK:

We know the consequences of this instinctively; we feel them. We know that having two thousand Facebook friends is not what it looks like. We know that we are using the software to behave in a certain, superficial way toward others. We know what we are doing “in” the software. But do we know, are we alert to, what the software is doing to us?

This was the final nail in the coffin of my concerns about Facebook. I realized what it was doing to me, and so bid, “Adieu.”