[As we are patiently waiting for Wes Anderson’s Grand Budapest Hotel to wend its way to the flyover states, I thought I might share a snippet from a presentation I made last year under the auspices of the Duke Initiatives in Theology and the Arts (thanks to the hospitality of the inestimable Jeremy Begbie).  Reading A.O. Scott’s review of the new film brought this to mind.]

I have elsewhere argued that the imagination is less a faculty of “invention” and innovation and more like a preconscious comportment to the world—a tacit “understanding” of the world that is fundamentally aesthetic.  I think this has important implications for how the imagination is invoked in the encounter between theology and the arts.  On this alternative account, the imagination is not a unique skill or capacity peculiar to artists; the imagination is a fundamentally human “faculty” by which we orient ourselves to the world.  So while artists are without question creative, that does not mean that they have cornered the market on the imagination.  Instead of placing the imagination on the production side of art (the inventive, creative pole), we should recognize the power of the imagination on the reception side of art (though not only art): it is our imagination that “receives” the work of art, and such works of art can (and do) function as imagination-training-sites, formative encounters that both appeal to—and “trigger”—the imagination while also shaping and forming our imaginative horizons.  (This has extra-artistic implications as well.)
If a Christian theological engagement with the arts is going to focus on the imagination, I’m suggesting that this should be less fixated on the dynamics of creativity and invention and more focused on the irreducible “know-how” (praktognosia) that is named by “the imagination.”  In that case, the imagination will be an occasion for thinking about the dynamics of truth—the unique, affective way that art tells the truth about the world rather than just “expressing” my interior sincerity.  Our most powerful works of art are not just products of the imagination; the truth they tell is truth fit to our imagination.  They can only be understood on a “poetic register,” can only be understood by the imagination.  And that understanding is itself irreducible.
If we were to make that move, it would lead to a new Christian appreciation for what I can only describe in a ham-fisted way as “formalism”—an appreciation for form as truth.  In Imagining the Kingdom I get at this through Cleanth Brooks’ notion of “the heresy of paraphrase.”  Here I’d like to try a different tack with a different medium—through an engagement with the films of Wes Anderson, focusing on The Royal Tenenbaums as a case study.  One could think of this as an expansion of a terse footnote in Imagining the Kingdom (p. 48n.31).
I should confess that this case study was prompted by Michael Chabon’s recentmeditation on Anderson’s oeuvre in the New York Review of Books.  (Chabon’s essay is one of those disheartening works of genius that make you lose any hope that you’ll ever be able to write.  “That’s it; I quit. I’ll never be Michael Chabon.”)  He looks to Anderson as both a chronicler of brokenness and a quiet, humble evangelist for the hope that things might be otherwise.  “The world is so big, so complicated, so replete with marvels and surprises,” Chabon observes, “that it takes years for most people to begin to notice that it is, also, irretrievably broken.  We call this period of research ‘childhood.’” It is a difficult education.  “Everyone, sooner or later, gets a thorough schooling in brokenness.  The question becomes: What to do with the pieces?”  Some hunker down atop the pile of brokenness and “make do;” others take out their frustration by breaking the fragments that remain.  But “some people,” he says, “passing among the scattered pieces of that great overturned jigsaw puzzle, start to pick up a piece here, a piece there, with a vague yet irresistible notion that perhaps something might be done about putting the thing back together again.”  Wes Anderson, he argues, is one of those people.
Granted, because we only get glimpses of how it’s supposed to be, “through half-closed lids,” our efforts at rebuilding will be, at best, approximations: “A scale model of that mysterious original, unbroken, half-remembered.  Of course the worlds we build out of our store of fragments can only be approximations, partial and inaccurate.  As representations of the vanished whole that haunts us, they must be accounted failures.  And yet in that very failure, in their gaps and inaccuracies, they may yet be faithful maps, accurate scale models of this beautiful and broken world.  We call these scale models ‘works of art.’” 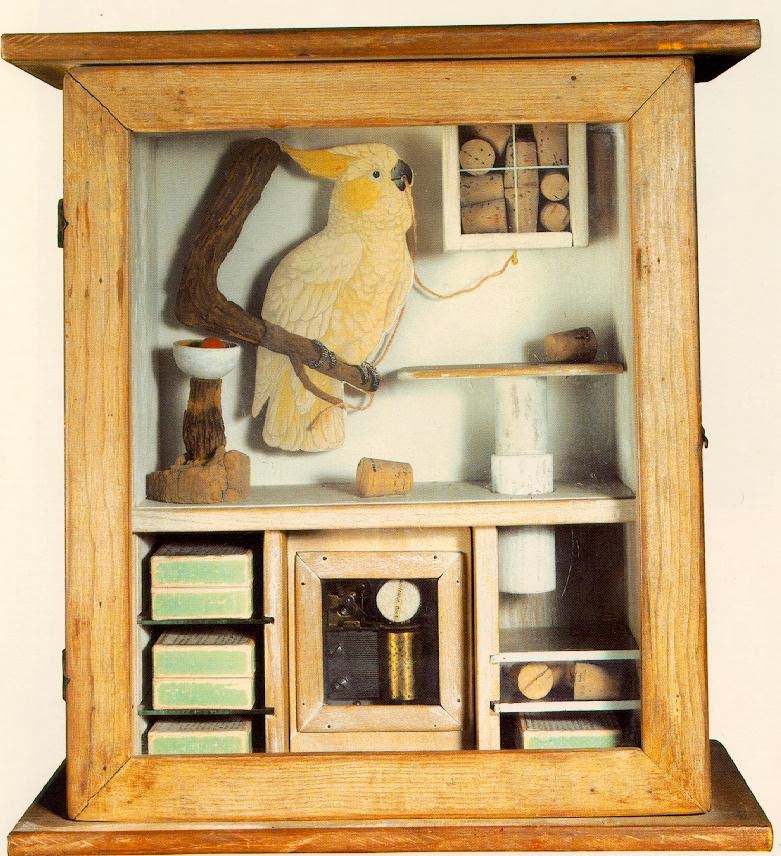 Wes Anderson is that kind of artist.  As Chabon goes on to highlight, Anderson’s films are often compared to Joseph Cornell’s boxed collages that reproduce a world in miniature.  Indeed, such miniature panoramas often appear in Anderson’s films.  But the entirety of Anderson’s filmic aesthetic does the same thing: it is not a surrealist or fantastical invention of a world so much as a re-framing of our world. (And the framing is not just visual; soundtrack is also essential. Cue Jeremy Begbie.)
Chabon captures this brilliantly:

“For my next trick,” says Joseph Cornell, or Valdimir Nabokov, or Wes Anderson, “I have put the world into a box.”  And when he opens the box, you see something dark and glittering, an orderly mess of shards, refuse, bits of junk and feather and butterfly wing, tokens and totems of memory, maps of exile, documentation of loss.  And you say, leaning in, ‘The world!’”
I would suggest that Anderson’s films tell the truth on the register of the imagination in ways that we might not realize, or even be able to articulate, and yet nonetheless feel.  A Wes Anderson film plays the strings of your imagination in a way that has you sort of grinning and longing and smiling and mourning, all for reasons you know not why; and yet you can’t stop.  Chabon’s essay helped me to excavate something of my visceral reaction to Anderson’s 2001 movie, The Royal Tenenbaums. 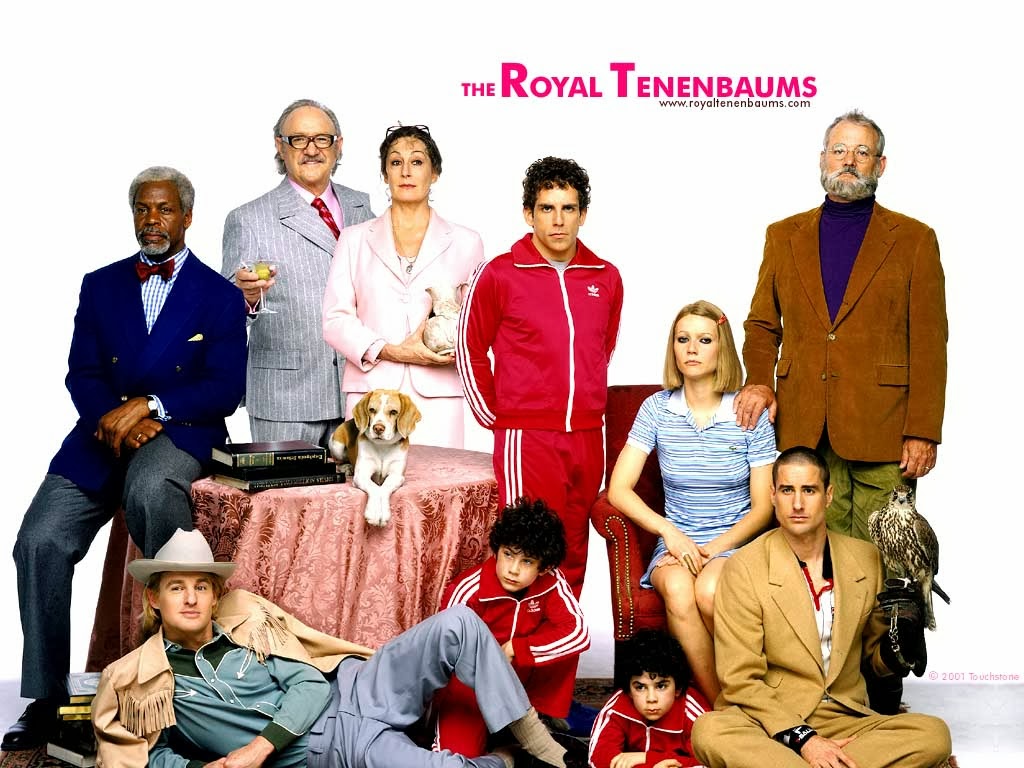 The world of the Tenenbaum family, framed in this film, is certainly a broken world: an absent scoundrel of a father who has abandoned his family; a son who is a young widower; an adopted daughter who has always been “other;” a suicidal son who is in love with her; and a dear family friend beset by addiction.  There’s nothing pretty about this family.
And yet the movie is so oddly gorgeous.  (I’ll say more about the “oddly” in a moment.)  But its aesthetic does not beautify this brokenness; it doesn’t “pretty up” fragmentation or paper over the horrors.  To the contrary, it is the frame—the very form of Anderson’s shots—that attests to the fact that things should be otherwise.  In some way, the story of an Anderson movie is almost—almost—irrelevant.  Or better: the story Anderson tells is told in the form.

Royal’s character is a study in this: Anderson cultivates our sympathy for him, despite almost everything he actually says.  (Gene Hackman’s acting here is an incredible dance with the director—a stunning performance.)  Royal is shot in a way that exudes sympathy, and clothed in a way that testifies to the fact he wants to be something other than he is.  The narrative force of an Anderson film is carried visually.  It’s not that screenplay isn’t important, but that the story is (also) told on the register of frames and shots and sets—and that this “telling” is a narration that uniquely and irreducibly speaks to the imagination.

For example, how might this help us make sense of Anderson’s near-history aesthetic—the indescribable way that he cultivates a feel that is at once old but timeless, un-placeable and yet vintage.  What’s at work, for example, in the mix of elegance and ugliness in The Royal Tenenbaums?  The majestic oak paneling and the beat up old Gypsy cabs; the Pellegrino on the dingy old refrigerator; the sumptuous beauty in a shot of a suicide returning home on a vandalized city bus? [with Nick Drake’s “Fly” as the soundtrack, pleading “Please, give me a second grace…”].  What we see is the sad dignity of the formerly bourgeois, the air of civility that clings to the nouveau-pauvre, you might say.  And yet it is in that tension between elegance and ugliness, a tattered sophistication, that we absorb a sense of how things could be—how things ought to be—at the same time we sense that the world is askew, that it’s not the way it’s supposed to be.

Despite a common criticism, I don’t think this is just nostalgic.  (In the spirit of Kurt Cobain’s “Just because you’re paranoid doesn’t mean they’re not after you,” we might also say: Just because you’re nostalgic doesn’t mean things didn’t used to be better.) Indeed, I think Chabon gives us a frame to see anew Anderson’s aesthetic: he cultivates a sense of order in the very frame of his camera.  The function of line and color in his portraiture is a geometry of normativity.
The unapologetic artifice of Anderson’s frame is an aesthetic form of hope—a form that bears witness to order, harmony, perhaps even peace.  Despite the chaos that is captured in the frame, the framing of the shot registers that someone is in control.  And that is a truth that we absorb on the register of the imagination.