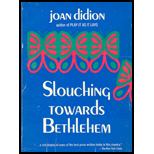 I have sort of read Joan Didion backwards, beginning with her masterful memoir, The Year of Magical Thinking, and now working my way back to Slouching Towards Bethlehem–one of those books that casts a long shadow over contemporary nonfiction. I picked up this book as a companion for a recent trip back to Los Angeles, both because Didion is one of those rare creatures who is a “native” of California, but also because California figures prominently in these essays. But I became so absorbed in the book I didn’t sleep on my redeye flight and finished it while taxiing at LAX.

As I understand it, Didion was sometimes mistaken for a reactionary conservative because of her unflinching depiction of the Haight-Ashbury district in the summer of ’67 (the title essay in this volume). This is clearly to misread her. Indeed, Didion cringes at her own inability to capture the essence of the summer of love in that essay, but she also laments misreading:

I suppose almost everyone who writes is afflicted some of the time by the suspicion that nobody out there is listening, but it seemed to me then (perhaps because the piece was important to me) that I had never gotten a feedback so universally beside the point.

This is part of the allure of this volume: it is both a collection of stellar nonfiction writing as well as reflexive commentary on the vocation and task of writing. Hence the more confessional, autobiographical moments of the book (on keeping a notebook, on going home, on leaving New York). Even these are packed with suggestive nuance. (For example, in commenting on the faith a young communist in Watts who seems driven by dread, Didion confesses: “I know something about dread myself, and appreciate the elaborate systems with which some people manage to fill the void, appreciate all the opiates of the people, whether they are as accessible as alcohol and heroine or as hard to come by as faith in God or History.”)

In these pieces from the 60s, Didion is both a powerful stylist and a crisp observer. Her writing couples bravura and insight as few can. In fact, in this sense she often reminded me of Norman Mailer (imagine Norman Mailer with a vagina!). There are paragraphs in here (especially in “Some Dreamers of the Golden Dream”) that left me almost breathless from their energy–a virtuoso performance that captures both a zeitgest and a geography in 3 pages of fire. But there are crystallized one-liners that nail reality to the wall (of Joan Baez she says, “until she found Carmel, she did not really come from anywhere”).

California is a quarry for Didion precisely because California is where Americanism goes to die–though it goes there thinking it will achieve eternal life. Didion often frames this in terms of the “dream”: the American dream, the dream of the Gold Rush, the buttoned-down dreamers in the Valley or the turned-on dreamers in the Haight. So the spiral of a disaffected marriage in southern California becomes “the revelation that the dream was teaching the dreamers how to live”–and kill and die. Or in a remarkable piece on John Wayne, a younger Didion confesses: “when John Wayne rode through my childhood, and perhaps through yours, he determined forever the shape of certain of our dreams.” Or she sees Howard Hughes as a projection of our dreams:

That we have made a hero of Howard Hughes tells us something interesting about ourselves, something only dimly remembered, tells us that the secret point of money and power in America is neither the things that money can buy nor power for power’s sake […], but absolute personal freedom, mobility, privacy. […] He is the last private man, the dream we no longer admit.

I suppose the line on Didion as a reactionary or a ‘conservative’ of sorts stems from a kind of memory or quasi-nostalgia that sometimes comes to the surface in this collection. For example, she recalls the scene of John Wayne’s “discovery” by director John Ford: “There, a meeting with John Ford, one of the several directors who were to sense that into this perfect mold might be poured the inarticulate longings of a nation wondering at just what pass the trail had been lost.” The same sense of loss and errancy gets a kind of imprimatur on her reflections on the history of Sacramento, her home town–a town founded on a curious mixture of hope and history, that things started downhill pretty much just after the “Eureka” moment of discovery:

Such a view of history casts a certain melancholia over those who participate in it; my own childhood was suffused with the conviction that we had long outlived our finest hour. In fact that is what I want to tell you about: what it is like to come from a place like Sacramento. If I could make you understand that, I could make you understand California and perhaps something else besides, for Sacramento is California, and California is a place in which a boom mentality and a sense of Chekhovian loss meet in uneasy suspension; in which the mind is troubled by some buried by ineradicable suspicion that things had better work here, because here, beneath that immense bleached sky, is where we run out of continent.

The lament/memory/nostalgia is most famously expressed in the opening of “Slouching Toward Bethlehem” where Didion observes “children who were never taught and would never now learn the games that had held the society together.” This opening gambit is completed by the end of the essay when she concludes:

At some point between 1945 and 1967 we had somehow neglected to tell these children the rules of the game we happened to be playing. Maybe we had stopped believing it ourselves, maybe we were having a failure of nerve about the game. Maybe there were just too few people around to do the telling. These were children who grew up cut loose from the web of cousins and great-aunts and family doctors and lifelong neighbors who had traditionally suggested and enforced the society’s values. They are children who have moved around a lot, San Jose, Chula Vista, here. They are less in rebellion against the society than ignorant of it, able only to feed back certain of its most publicized self-doubts, Vietnam, Saran-Wrap, diet pills, the Bomb.

[It is a straight line, I think, from this observation to the stinging satire of Shteyngart’s Super Sad True Love Story.]

So Didion regularly looks back, laments something lost, wonders whether we’ve taken some wrong turns. For those who think any glance back amounts to some kind of ideology (this assumption itself being ideological), this is enough for Didion to qualify as a reactionary. But is all memory nostalgia? And could our memory sometimes be right? Certainly Didion is no Whig; and only whiggish ideals of progress consider historical laments as false de jure. But some of us just refuse such simplicities. Perhaps Didion is a Burkean we need now more than ever.