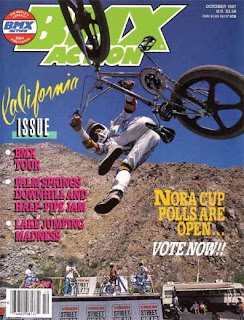 Before I became a Christian at 18 years old, my religion had been freestyle BMX. I lived and breathed to ride. (I remember a corny adaptation of a Harley-Davidson ad that I made the caption alongside my senior photo in the high school year book: “Some people ask me why I ride. For those who understand, no explanation is needed. For those who don’t understand, no explanation is possible.”) Even in the long, cold winters of southwestern Ontario, I rode all winter long in my basement, with U2’s Joshua Tree as the primary soundtrack (with an eclectic mix of Metal Church and Slayer!). I remember a crew of us scarfing lumber and scrap from wherever we could, building ramps of every shape and size. I remember saving up to finally build my own 8 ft. quarterpipe in the backyard with plans from BMX Action magazine. The feel of riding is something that has seeped deep into my bodily memory. Some nights lying on the couch I can still transport myself into the fluid feel of riding a quarterpipe, can still relive the contortions of freestyle. It’s as if my bike is a kind of phantom limb.

Magazines were an alternative universe for me: in a little village of 600 people I waited hungrily each month for the next BMX Plus! issue to arrive, then BMX Action, and later Freestylin’. I lived vicariously through all of those beautiful people who lived in exotic places like Redondo Beach and Torrance, CA! I had always dreaming of making a pilgrimage so I could ride on the Redondo Pier (many years later, I’d teach just up the road in Westchester and regularly spent time in Redondo and Torrance, sans bike). Eventually, back home I started my own ‘zine devoted to skating and BMX, with photos, commentary, even poetry! Deep in the recesses of our basement is a milk crate with old issues of the ‘zine, my first forays into writing and publishing.

So, as you might imagine, I’m a bit of an X-Games geek (downloaded the app on my iPod!). But nothing (re)captured my imagination like ESPN’s recent documentary–one of the 30 on 30 docs–on Mat Hoffman, one of the real pioneers of vert. I still remember when this yokel from Oklahoma started emerging in the magazines–crazy, crazy air (=height!) coupled with tricks that were unthought of before his advent. In fact, I would later compete against Hoffman in a halfpipe contest in Grand Blanc, MI. I say “compete against” in a generous sense: all that means is that Hoffman was still an amateur (he would soon turn pro), and we were participants in the same competition. He finished first; I think I finished 31st. But I did see his first attempt at a 900 in competition.

The ESPN documentary, “The Birth of Big Air,” is very well done–and for anyone with any memory of this era, quite moving. It tries to set the record straight by showing the extent to which X-Games hype owes much to Hoffman’s insane, unheralded efforts on rickety ramps in Oklahoma. Indeed, the contrasts between Hoffman’s backyard zaniness and current X-Games televised glamor is striking (and, to be honest, disheartening).

But I’m also quite excited: my youngest son has expressed an interest in learning to ride more seriously. So I’m looking forward to tuning up my old GT Pro Performer still out in the garage.