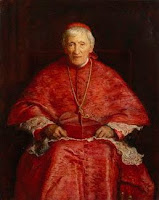 While I was working on Desiring the Kingdom, I led our college’s Semester in Britain program, teaching a course entitled “Victorian Britain and Postmodern Culture.” The course included units on Ruskin, the Pre-Raphaelites, William Morris, even Oscar Wilde. But the hinge of the course was a unit devoted to the Oxford Movement, with special focus on Cardinal Newman. The footnotes to Desiring the Kingdom don’t do justice to the impact of this immersion on my thinking. But in Terry Eagleton’s recent article on Newman in the London Review of Books, Eagleton highlights the overlap between my concerns and Newman’s:

Militant atheists today regard religious faith as a question of subscribing to certain propositions about the world. Newman countered this theological ignorance, pervasive in his own time too, with the Romantic claim (and this from one of the towering intellects of the Victorian age) that ‘man is not a reasoning animal; he is a seeing, feeling, contemplating, acting animal … It is the concrete being that reasons.’ It is the imagination, he holds, which is primary in matters of faith. Yet this passionate subjectivity was never whimsical subjectivism. How could it be, in a Catholic thinker for whom faith and truth were communal and institutional rather than a matter of private intuition? Newman, like Kierkegaard, recognised that religious faith is a kind of love, and like love engages intellect, emotion, experience and imagination together. There is a ‘notional’ kind of knowledge, Newman argues in An Essay in Aid of a Grammar of Assent, by which he means a knowledge of abstract ideas, and there is ‘real’ assent, which involves one’s whole personality.