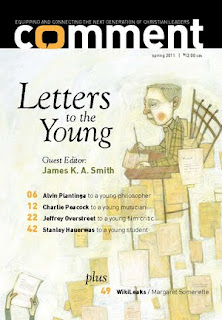 I was both honored and intrigued when my friends at Comment approached me with an invitation to guest edit a special issue of the magazine. Their idea was to produce an entire issue inspired by the genre of Letters to a Young Calvinist. And so we came up with “Letters to a Young,” the March 2011 issue of Comment. I’m really pleased with the results.

On the inside, this issue features letters written to young people across an array of vocations. You’ll find

and many more. Check out the full table of contents to get a sense of the range of vocations and writers.

I’m also really pleased with the outside of the issue–the cover. I was able to recruit a local illustrator, Rebecca Green, to do an original piece for this issue. Deanna and I have long been a fan of Rebecca’s work: two small pieces entitled “Keep the Love Alive” hang in our living room. So it’s a treat to introduce her work to a new audience.

Single copies are available for purchase; but better yet, subscribe to Comment now and receive “Letters to the Young” as your first issue.