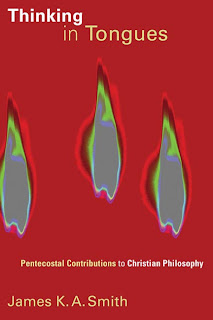 I’m just returning from a few days at the Society of Vineyard Scholars conference, which was exhausting but also a blessing. Good people with an exciting vision of how reflection can serve the church’s mission: sign me up for more of that. I’ve also never had a speaking engagement in which I’ve felt more cared for, buoyed by prayer. I return tired but grateful.

When I was invited to be one of the keynote speakers for the conference, they asked me to do some talks that would draw on themes from both Desiring the Kingdom and Thinking in Tongues because both books were addressing themes of interest to Vineyard folk: DTK picks up on “kingdom” themes that are important to Vineyard theology (tracing back to the influence of George Eldon Ladd’s eschatology on John Wimber); and Thinking in Tongues intersects with Vineyard’s emphases on the gifts of the Spirit and charismatic experience.

But not until I was putting these things together did I realize something. While I’m at work on volume 2 of the Cultural Liturgies trilogy (of which Desiring the Kingdom is the first), in an important way Thinking in Tongues is already a kind of sequel to DTK insofar as it further develops some of the epistemological implications of the anthropology sketched in DTK–particularly a “narrative” epistemology which makes sense of the centrality of affect and emotion in our construal of the world. I also undertake some methodological experiments in the book that resonate with my claims about the imagination in Desiring the Kingdom.