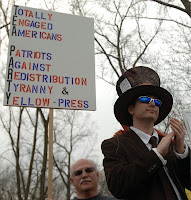 Somehow the Grand Rapids Press managed to completely garble my letter to the editor regarding their coverage of a recent “Tea Party” event. For the record, I here provide the my correct text of my letter, and have pasted the photo that appeared with the print version of the story in last Sunday’s paper.

The Grand Rapids Press should perhaps change its format to a tabloid layout. That would be more appropriate for the kind of journalism featured on the front page of the Sunday paper. There a story headline proclaimed “Tea timers turn out in force.” The article itself claimed that they “packed” Riverside Park for a rally on Saturday.

But curiously, the only picture we’re offered is a cropped shot of two people. (A “packed” Riverside Park would be a site to behold. No picture available?) Furthermore, the article provides not a single estimate of the number attending the rally.

You can do better. Whether you want to is the question. Or would the Press, in league with talk radio, prefer to cynically foment an illusion?