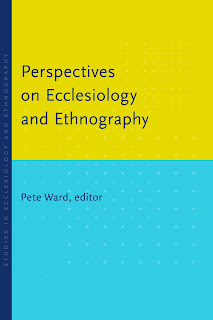 At the recent meeting of the American Academy of Religion I had the pleasure of participating in a session on ecclesiology and ethnography, engaging some of the contributors to an excellent new book edited by Pete Ward: Perspectives on Ecclesiology and Ethnography (Eerdmans, 2012).  This has since been complemented by a subsequent volumed edited by Christian Scharen: Explorations in Ecclesiology and Ethnography (Eerdmans, 2012) in which (full disclosure) my friend Mark Mulder and I have a co-authored chapter, “Understanding Religion Takes Practice: Anti-Urban Bias, Geographical Habits, and Theological Influences.”

The AAR session included presentations from John Swinton, Mary McClintock Fulkerson, Luke Bretherton, and Elizabeth Phillips, all drawing on their chapters in the book.  Here I reproduce the notes of my response as a way of highlighting this new interdisciplinary conversation and, I hope, as a way of extending and expanding it.

Ecclesiology and Ethnography: A Response