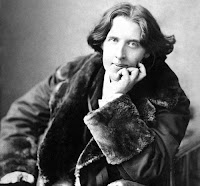 While summer 2010 seems a long ways off, I’ve already been thinking ahead as I’ve been working on the syllabus for a course I’ll be teaching at Regent College in Vancouver. I jumped at the opportunity because this will provide a chance to indulge my interests at the intersection of theology and literature. The course will be entitled Decadence, Aestheticism and Grace: Christian Theology and fin de siècle Literature.

Here’s a brief description from the draft of the syllabus:

While Oscar Wilde was on his honeymoon in Paris, he discovered A Rebours (Against Nature), a scandalous novel by the French “decadent” writer Joris-Karl Huysmans. This novel—detrimental to the imagination of Wilde—became the “poisonous” book of Wilde’s novel, The Picture of Dorian Gray. And yet, the book had a strange ambiguity. As Wilde narrates, “One hardly knew at times whether one was reading the spiritual ecstasies of some medieval saint or the morbid confessions of a modern sinner.” The goal of this course is to explore that ambiguity. The decadence and aestheticism of literature at the end of the 19th century seem to be scandalous antitheses of the Christian Gospel. But we will explore how these movements actually share much in common with orthodox Christianity. Thus these works are a kind of “back-handed” witness to the richness of God’s creation, the need for redemption, and the enchantment of the world.

We’ll be reading Huysmans’ Against Nature and Wilde’s Picture of Dorian Gray alongside selections from Augustine’s De doctrina christiana, Jean-Luc Marion’s God Without Being, and Conor Cunningham’s Genealogy of Nihilism. (I’m already hatching a sequel course that would tackle Cormac McCarthy, David Foster Wallace, and either Julian Barnes or Nicholson Baker.)

This will be part of Regent College’s rich summer programming, which functions as an intellectual retreat in one of Canada’s most beautiful locales. If you’re interested, watch Regent’s Summer Term page for updates.