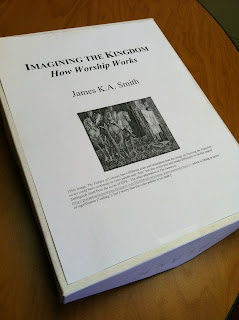 Well, I just dropped this off at the offices of Baker Publishing Group: the manuscript for the sequel to Desiring the Kingdom. My working title (we’ll see if it survives) is Imagining the Kingdom: How Worship Works.

Now I’m coming up for air. The past two months have been a blur. Deanna has passed along index cards to help me remember the kids’ names! There’s nothing heroic or virtuous in what I’ve just done. Indeed, it’s like we’ve lived with a mistress in the house for two months. I’ll be using the advance for marital counseling! (Not really–which is in itself a testimony of what an incredibly gracious woman Deanna is.)
From the daily log I kept in my notebook, I see that I created the manuscript file on December 12–the proverbial “blank page” beginning. I ended that day with 829 words. When I finished the book, on February 12, it was just a hair over 95,000. Binge writing at its best/worst. Again, this is not something I recommend.
Now I need to gain some distance from the manuscript for a month or two so that, at the galleys stage, I can come back with a sufficiently critical eye to slash and burn. Right now, while I’m glad to get this off my desk, I have a deep sense of how much the book needs to ferment and mature.
Over the next couple of months I’ll sketch some of the core themes and layout the final Table of Contents. Right now it includes a chapter on Merleau-Ponty and another on Bourdieu, trying to marshal their theoretical work as part of a conceptual toolbox to help us think about liturgical formation. They are then enlisted in the second part of the book where I argue for the centrality of the imagination–and hence the aesthetic–in the dynamics of liturgical formation. So while it develops and expands the argument of Desiring the Kingdom, I also hope it finds a new audience amongst those engaged with the arts.
The book is slated to appear in November.
But for now, I’m just glad to bid the manuscript a fond Adieu!