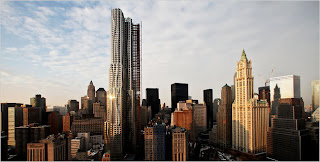 Frank Gehry is an architect that people love to hate, mainly because he is one of the few contemporary American architects who has become a “brand”–to the point that you keep waiting for a Gehry design line to start showing up in a Target store near you (a la Michael Graves). Associating your name with Disney certainly doesn’t help.

But I was doubly impressed by Nicolai Ouroussoff’s NYT piece about Gehry’s new Manhattan tower. “Doubly” impressed because, on the one hand, I think Ouroussoff’s article is an excellent little work of architectural criticism and because, on the other hand, he made me sympathetic to Gehry in a way I haven’t been before. While he notes that Gehry’s residential tower seems “to epitomize the skyline’s transformation from a symbol of American commerce to a display of individual wealth,” he goes on to note:

The building is particularly mesmerizing from the Brooklyn waterfront, where it’s possible to make out one of the deep setbacks that give the building its reassuringly old-fashioned feel. In daylight the furrowed surfaces of the facades look as if they’ve been etched by rivulets of water, an effect that is all the more dramatic next to the clunky 1980s glass towers just to the south. Closer up, from City Hall Park, the same ripples look softer, like crumpled fabric.

(The flat south facade is comparatively conventional, and some may find perverse enjoyment in the fact that the building presents its backside to Wall Street.)

The power of the design only deepens when it is looked at in relation to Gilbert’s Woolworth building. A steel frame building clad in neo-Gothic terra-cotta panels, Gilbert’s masterpiece is a triumphant marriage between the technological innovations that gave rise to the skyscraper and the handcrafted ethos of an earlier era.

The building’s endlessly shifting surfaces are an attack against the kind of corporate standardization so evident in the buildings to the south and the conformity that it embodied. He aims, as he has throughout his career, to replace the anonymity of the assembly line with an architecture that can convey the infinite variety of urban life. The computer, in his mind, is just a tool for reasserting that variety.

I’ve added the building to my hoped-for architectural tour when I visit Manhattan in May.