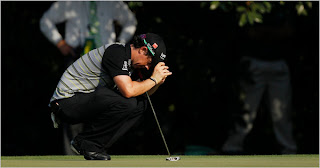 A lot of my friends love to hate golf–with all its bourgeois trappings and conservative leanings, its generally patrician vibe. And they sure can’t understand how someone could watch golf.

I’m guilty on all counts, but won’t undertake any apologetics here. As a bit of testimony, let me just say this: golf is the only televised sport that all my kids will watch with me. Go figure.
But for those of us who have that love-hate relationship with the game (which just is love for the game), this year’s Masters was as close as one gets to athletic poetry, the energy of a Greek tragedy played out on a stage of sculpted horticulture whose lush beauty is a dream set–magnolia blossoms framing the perfection of Augusta’s fairways and undulating greens. Long shadows trail across the greens during the late-afternoon close of the drama. Augusta is so stunning you can almost smell it on TV.
The real heros of this year’s Masters have to be the editors at CBS: with no less than 10 players in contention for most of Sunday, every shot had significance, and you could feel the director barely keeping up: KJ Choi dropping a putt on 15, then cut to Jason Day ripping a drive on 14, cut to Tiger roaring up the fairway on 16, etc., etc. Never has a golf tournament had such non-stop energy (making a mockery of the supposed ‘excitement’ of either baseball or football which both have tiny bursts of action interspersed with long stretches of standing around and long commercial breaks).
The 2011 Masters cast was international and intergenerational: the top of the leaderboard featured a player from every continent except Antarctica. And their ages ranged from 21 to 40. Between them all it was a weekend of non-stop excellence and heartbreak, genius and foibles, unthinkable shots and lip-biting misses. (I do think one has to have played golf to be able to appreciate the almost superhuman mastery of the game exhibited by the pros.) This has to make the taste of victory all the sweeter for Charl Schwartzel.
All of this included, of course, the meltdown of young Rory McIlroy–the phenom from Northern Ireland who had led the tournament at the close of each of the first three days, coming into Sunday with an unheard of 4-shot lead. And then golf showed up. Every golfer knows that at any moment he, like Jonathan Edwards’ sinner, is suspended above the abyss by an ever-so thin thread of intertwined grace, guts, and luck. And that thread can unravel quickly. What makes golf so awe-inspiring and expletive-inducing is the fact that it is a game measured in yards but won or lost by millimeters. (See, for example, ESPN’s “Sports Science” account of the physics of lip-outs.) More significantly, golf is an incredible interplay of mind and body: on the one hand, it is an intense example of the mechanics of bodily automation, of what Merleau-Ponty would describe as praktognosia, a “know-how” that is carried in the flesh. On the other hand, in a Yogi Berra-like quip, golf is 90% mental and 10% psychological. It is a game that is played, as Bobby Jones put it, on the 5-inch course between your ears.
It was heartbreaking to watch young McIlroy self-destruct: bouncing off trees, hitting the lips of bunkers, driving into the creek, three-putting holes. Augusta was eating him up. (There’s always a Schadenfreude encouragement in this for duffers like me: “Hell, I could do that!” you can shout at the TV.)
But here, too, we see the Calvinist virtues of golf: there’s no tapping out; no throwing in the towel; and Rory didn’t indulge in any of Tiger’s juvenile antics of cussing or throwing clubs or pouting around the course. While he’d cover his eyes and cringe at the errant flight of his drives, he’d also step up for the next shot. And he’d par the last 3 holes. That’s a feat in itself.