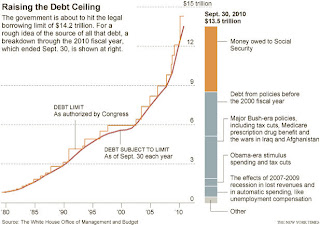 The Times today includes an article that might be overlooked: “Next on the Agenda for Washington: Fight Over Debt.” It notes that in the next couple of months, the United States will reach the congressionally-imposed limit on borrowing, capped at the staggering debt ceiling of $14.25 trillion (for the sake of argument, pretend it’s possible to imagine what a “trillion” is). As the article succinctly notes,

Once the limit is reached, the Treasury Department would not be able to borrow as it does routinely to finance federal operations and roll over existing debt; ultimately it would be unable to pay off maturing debt, putting the United States government — the global standard-setter for creditworthiness — into default.

The same article is accompanied by the graphic above which documents the exponential growth in federal debt since Reagan (under whom it tripled). In sum, the Reaganite dream of unfettered spending and tax cuts is a fairy tale we’ve been telling ourselves for over 30 years and somehow we keep believing it. Our grandchildren, in squalor, will wonder how we could have been duped for so long.
To note this, however, is not to concede the slash-and-burn (supposed) “necessity” of the Paulists (Ron and Rand) or the generally “conservative” proposal of, say, Paul Ryan. Yes, the formula that’s got us here is unfettered spending coupled with low taxes (where spending, as you’ll also note above, includes a rash of military spending on the basis of Bush II foreign policy). But only a lazy, unimaginative take on this would assume that “low taxes” is a given. So sure, one strategy to reduce debt would be to slash spending, which inevitably happens on the backs of the poor and vulnerable, particularly women and children.
But of course there’s another (unthinkable) option here: raise taxes. In this respect, David Brooks’ Friday column is very helpful when read alongside today’s article. As Brooks points out in “The Ryan Journey,”

The best thing about the long-term budget proposal from Paul Ryan, the Republican chairman of the House Budget Committee, is that it forces Americans to confront the implications of their choices. If voters want taxes that amount to roughly 18 percent of G.D.P., then they are going to have to accept a government that looks roughly like what Ryan is describing. The Democrats are on defense because they are unwilling to ask voters to confront the implications of their choices. Democrats seem to believe that most Americans want to preserve the 20th-century welfare state programs. But they are unwilling to ask voters to pay for them, and they are unwilling to describe the tax increases that would be required to cover their exploding future costs.

This does seem to be a fair observation of where we’re at. I’m less convinced by Brooks’ claim that “[r]aising taxes on the rich will not do it,” since I would think a graduated tax like most other North Atlantic countries could sure go a long way. But I do agree with his other point: if Obama and the Democrats want to retain programs that care for the poor and vulnerable (as they rightly do!), then we need to face another reality: the middle class need to bear the brunt of this, too. Surely we can give up a few bottles of wine a month, a few of the attractions on our vacations, a few rounds of golf for the sake of the poor.

But as the Democrats know, we’re no longer talking about fiscal matters: we’re talking about whether the middle-class citizens of this country actually have the political will to care for their neighbor. I think one of the core argument of Eric Gregory’s Politics and the Order of Love is to show that Augustine would have expected the church to be that body habituated to care for the neighbor, exhibiting civic virtues which are just the sort of political will and desire needed to address the sorts of problems we’re grappling with. But sadly, the church in the United States is just as captive to the selfish atomism of the culture as anyone–indeed, somehow even more so, ardently eschewing any sense of fiscal obligation to the poor, opting for the pious patina of libertarianism masked by calls for “charity.”