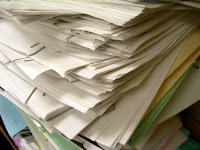 While it is the very height of bourgeois whining, one doesn’t have to spend too much time around professors before you begin to hear complaints about grading. Used to our tenured autonomy, and generally enjoying discussion of ideas and texts in class, “grading” is the one drudgery that we have to do. It also comes with some sense of urgency and tends to coagulate around certain times. Around mid-October and early December, I’m pretty sure my wife has taken to slipping Prozac in my tea–which is then exacerbated but my own uptake in whiskey consumption at these points in the semester.

But then this afternoon I hit upon this revolutionary idea while grading papers for my Congregational & Ministry Studies class, “Interpreting Church Practices”: what if I assigned projects that I’d actually like to read? Then the time spent grading would actually be a pleasure (all things considered, of course–that is, as long as you can count on students producing decently readable papers).

That was my experience this afternoon. As part of a course focused on practices of marriage, family, and singleness, I assigned students the task of excavating and articulating the normative visions of marriage, family and sexuality implicit in cultural artifacts such as TV sitcoms, dramas, reality TV, films, and novels. So I just spent an afternoon reading some really thoughtful analyses of television shows like Desperate Housewives, Mad Men, and Gilmore Girls and films that included Paper Heart, Elizabethtown, and Away We Go. It was almost like not working–which is the way professors feel the rest of the time! This isn’t going to help with the proverbial “blue books,” but it’s got me thinking about more creative assignments for papers and projects.