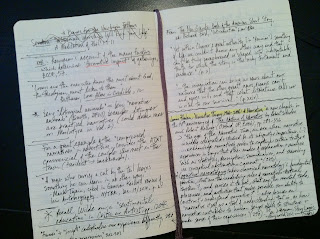 There’s no dearth of publishing in Christian theology. To the contrary, there has been an expanding universe of theological publishers churning out more and more books, now supplemented by the oft-hailed (and over-hailed, I’d say) blogosphere. So at this moment there are countless theologians writing–sketching outlines and plans, whiling away at manuscripts, passionate about their ideas, all with the aim of reaching an audience via the still-exhilirating technology bequeathed to us by Gutenberg.

But there surely is a dearth of good writing in theology. For a discipline indebted (one hopes) to the Word become flesh, theologians seem rather docetic about publishing–didactically focused on concepts and ideas and argument with little attention to the “flesh” of writing. Fixated on “content,” they are remarkably unconcerned about form. The result is a strange paradox: by basically not thinking about language, form, and writing, the theologian treats language as if it were transparent; yet it is precisely when language and form are invisible in the writing process that we get the most obfuscating prose. Some of the most important books in theology over the past twenty years have bordered on being unreadable (and the “bordered on” is a generous qualifier!). Granted, some of this is the product of the weird dynamics of academese and the desire to appear “rigorous.” But surely some of this is also the product of a widespread lack of attention to form, to the process and dynamics of writing (well).
There are, of course, some exceptions. Rowan Williams is a model of winsome clarity and accessible profundity; Stanley Hauerwas’ writing reached a new level in his recent memoir; Janet Martin Soskice’s work is exemplary. And there are others. But for every decent writer in theology, it would be easy to line up 20 examples of boring, plodding, didactic clunkiness.
There have also been some efforts to address this. The recent seminar led by Marilynne Robinson at Princeton’s Center of Theological Inquiry was an encouraging and enticing sign. But we need more apprenticeships in writing–or at least need more theologians willing to learn the craft of writing, attentive to form.
I was prompted to think about this while reading the recent Paris Review interview with Jonathan Franzen. The expansive conversation covers the span of Franzen’s career and is an occasion for him to reflect on his maturation as a writer. Commenting on the gut-wrenching cuts he had to make to the manuscript of The Twenty-Seventh City, Franzen describes an epiphany. After being pressed by the novelist Hugh Nissenson, Franzen recalls,

I set down the phone and picked up the manuscript, which I hadn’t looked at in eight months, and I said, “My God, there’s two hundred pages that I can cut in half an hour.” I just suddenly saw it. I suddenly made the connection between my needs as a reader and what I was doing as a writer, which I had never made before. That in fact I was not interested in punishing the reader, because I didn’t enjoy being punished myself. If I wanted the book to be read, it needed to move, and so I had to make the cuts to make it move (p. 57).

How different would theological writing look if more theologians could make the connection between their needs as a reader and what they’re doing as writers?