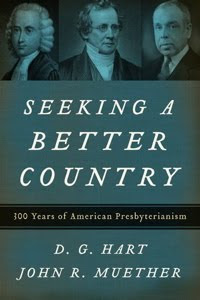 In contrast, Hart and Muether extol a version of American Presbyterianism that eschews such a confusion of church and state, preserving a commitment to the “spirituality” of the church, and thus seeking that “better country” which is a heavenly city (Hebrews 11:16). Only some American Presbyterians, as the story goes, are really committed to the better “better country.”

That said, I came to the book with interest and quite a bit of sympathy for their concerns and critique, though I might not sign up for their implied prescriptions. The tone is decidedly not hagiographic (except for the portrayals of Machen and the OPC); indeed, by the end of the book the authors have told such a woeful tale that they have to look for “silver linings” to lighten the jeremiad with some shred of hope. In the course of the story, there are several themes that emerge that have significant contemporary relevance.

The Long March of Americanization. At the very opening, Hart and Muether set for themselves a puzzle: “why a Protestant communion with doctrinal tenets (i.e., Calvinism) running directly contrary to American ideals of freedom and self-sufficiency became attractive to so many successful Americans” (2). This is a constant thread in the story as they note the gradual and fervent assimilation of American Presbyterianism to “Americanism” and the ideals of political liberalism inherited from Locke. This assimilation takes on new intensity in the Revolutionary era, indicating “an unhealthy identification with and disproportionate allegiance to the United States that would haunt the Presbyterian Church, especially during the Civil War” (82). Akin to what sociologist Stephen Warner calls the “de facto congregationalism” of American Christianity, Hart & Muether note that “Presbyterians in the United States could not escape the anomalies inherent in a voluntary church” (88). Their analysis helps to understand what might be a counter-intuitive notion: that the liberalization of the PCUSA in the 1960s & 70s was actually an expression of the same assimilation (246-247).

Here is where I think their “two kingdom” (2K) sympathies provide a perspectival advantage: it enables them to see the long history of what we might have called American Presbyterianism’s “Constantinianism” (before Peter Leithart went and complicated that short-hand use of the term!). Ironically, here 2Kers, Anabaptists, and “Reformed Hauerwasians” like me (believe me, it’s a small club) share a similar diagnosis, with very different prescriptions. I think this “blend” can also be seen in many of James Davison Hunter’s criticisms in To Change the World.

Liberalism and Evangelicalism Amount to the Same Thing. It’s hard for Hart & Muether to cloak their disdain for American revivalism and “New School” Presbyterianism. The descriptions of Whitfield and Finney drip with revulsion. But to their credit, this is not just a matter of taste. Rather, I think one of the real cautionary tales of the book is the way in which “evangelical” ecumenism was just as responsible for the dilution of Reformed theology and identity as “modernism” and liberalism. This sort of analysis was broached earlier in Hart’s excellent and under-appreciated book, Deconstructing Evangelicalism–a book that plays a big role in my own discomfort with “evangelicalism” as a descriptor for either a church or a theology. “Evangelicals” in mainline denominations often target the “liberals” or modernists in their midst as the threat to true faith, but then seek to retreat to a kind of pan-conservative, parachurch vagueness as the stand-in for orthodoxy. In Seeking a Better Country, Hart & Muether demonstrate, through historical episodes, how vague appeals to defend “conservative” positions entail losses on the same order as “liberal” agendas for “updating” the faith. Same dilution, different pile.

It’s on this score that I think Seeking a Better Country would be instructive reading for those of us in the historically Continental (Dutch) stream of the Reformed tradition, particularly brothers and sisters in the CRC and RCA. Here, too, are heirs of the Reformation that are variously tugged between bland liberal Protestantism and parachurch evangelical pietism. Into this mix, Hart & Muether introduce an important distinction:

In coming to terms with this story, therefore, it is necessary to distinguish between the pietists and confessional conservatives. Two groups were at odds in the Presbyterian controversy. The Presbyterians who were either uncomfortable with or opposed to the external forms that made Presbyterianism distinct included evangelicals such as Speer and Erdman, who stressed conversion over doctrine, and liberals such as Coffin, who emphasized religious experience over creeds and confessions (203-204).

Confessional conservatives, on this accounting, represent a third way that, from the perspective of the other parties, are easily confused with their nemeses.

The Challenges of Confessional Subscription. The fragmentation of American Presbyterianism, with the rise of “sectarian” denominations such as the OPC, later hinged on matters of confessional subscription and the status of the Westminster standards (217-218). This reflected earlier distinctions between “New School” and “Old School” Presbyterianisms. But by the end of the book, where OPC strict confessional subscription is implicitly endorsed, Hart & Muether seem to have forgotten a sobering lesson from earlier in the story. In the midst of the New/Old School controversies, the Old School party secured a strict confessional requirement for ordained ministers. But as the case of Samuel Hemphill demonstrated, confessional subscription on its own did not guarantee what it sought to secure, namely, confessional orthodoxy. “Despite unanimity on Hemphill’s errors, the case did raise questions about the effectiveness of creedal subscription as a means of maintaining the purity of the church. After all, the wayward pastor had subscribed to the Westminster Standards when ordained in Northern Ireland. Then when admitted to the Synod of Philadelphia he reassured his future pastoral colleagues that he had no reservations about the Westminster Confession and Catechisms” (53). This is a sobering vignette for those of us in denominations and institutions that mean to take confessional subscription seriously; but it also seems to be a lesson lost in later in the book.

I have other quibbles and disagreements with the book. The most significant, and unsurprising, will be my skepticism about their valorizaton of “two kingdoms” theology and the constant talk of the “spirituality” of the church. We’re not going to settle that here (it’s a focus of some of my forthcoming publications). I would only register that Hart & Muether seem to assume a false dichotomy: that somehow concern for “cultural” witness entails aversion to concern for a “thick” ecclesiology and careful attention to liturgical form and theological specificity. I simply think this is a straw man, which explains why I am often very sympathetic to the 2K focus on the specifics of Reformed liturgical theology but demur from their notion that the church is therefore “spiritual” and a-political.

Related to this is a second concern with the book, namely its portrayal of Southern Presbyterianism. In this telling, Southern Presbyterians represent, for a long while at least, the Old School holdouts within American Presbyterianism. But that “orthodox” Presbyterianism was attended by defenses of slavery and segregation along the way. Hart & Muether’s 2K sympathies lead them to constantly criticize “activist” versions of Presbyterianism, whether left or right. The result is a picture of the “spiritual” church that seems to be almost “neutral” with respect to the evils and injustices of “this world.” Thus they can describe the “activism” that began to beset Southern Presbyterianism as once again a compromise of the “spirituality” of the church. But in doing so, it’s hard to see how this doesn’t come off as some kind of aversion to questions of slavery and, later, segregation. Thus Hart & Muether can comment:

A modified Calvinism meant a reexamination of the spirituality of the church. In 1935 the General Assembly redefined the doctrine to expand the church’s social witness. The Assembly reasoned that the church could not fulfill its “spiritual function” unless it “deals with those actual evils in the individual life, and in the social order, which threaten man’s moral and spiritual development.” A socially active church in the South, in turn, could not ignore the problem of race (232).

But given that they have consistently criticized a “socially active church” (as compromising its “spiritual” calling), it’s hard not to conclude that they would have thought it virtuous to “ignore” the problem of race. This, it seems to me, is one of the serious outcomes of 2K theologies: a big theological justification for the status quo. (What would a 2K approach have meant for apartheid in South Africa?)

Even with those concerns in mind, I commend the book, perhaps especially to non-Presbyterians. I especially think that my confreres in the CRC and RCA might find in this story a bit of a mirror, and thus a cautionary tale.