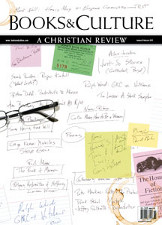 This is Alan Jacobs’ concern in his recent Books & Culture essay, “Just-So Stories.”  His primary target is the “just-so” stories about “story” that are now the darling of “evocriticism”–those (allegedly scientific) accounts that “explain” the power of “story” by explaining them away in terms of reproductive fitness and evolutionary adaptation.  According to these sorts of just-so stories,”story” is important because it teaches us empathy, or trains us to have a theory of other minds, or equips us to be able to make predictions–all of which enable members of the species to avoid getting killed and thus find the time to reproduce.  Jacobs’ rightly targets and questions such accounts.  (I would also recommend Jonathan Kramnick’s essay, “Against Literary Darwinism,” as well as the follow-up symposium in Critical Inquiry (Winter 2012).

But Jacobs’ argument gets a little fuzzier when he turns his critical attention to those Christians who have turned “story” into a bit of a cottage industry.  (And I suppose I felt myself a bit of a target here, given the centrality of story for my argument about “how worship works” in Imagining the Kingdom: How Worship Works.)  So I’d like to extend the conversation a bit, on just this point, precisely because I think Jacobs raises important questions and advances the conversation.

A little set-up: Jacobs’ criticizes Gottschall’s Storytelling Animal for treating “Story” as an identifiable abstraction; that is, Gottschall “too readily assumes that there is some general thing called Story, rather than considering the implications of the fact that there are many different kinds of stories.”  So Gottschall seems to claim that “Story” makes us empathetic.  In reply, Jacobs effectively asks: “Really?  Does the story embedded in Grand Theft Auto do that?”  His frustration is encapsulated in this passage:

I must confess to considerable irritation on this score. When people tell me that “Story” does this or that for us, I always want to throw up my hands and cry, Which story? Haven’t you noticed the astonishing variety of literary productions? Haven’t you noticed that some are brilliant and many are stupid and most are somewhere in between? That some are mean-spirited while others are generous-hearted? And that people don’t agree about which are which? How can anyone who has thought about such matters for five seconds think that you can say anything meaningful about an abstraction as vast and wooly as “Story”?

Christians have been guiltier than most of this tendency, arguing that people love stories because they are responding to the story God is telling through salvation history. Thus Brian Wicker’s 1975 book The Story-Shaped World; which sounds good until you ask which story the world is shaped like. The One Hundred Days of Sodom? The Tale of Squirrel Nutkin? Transformers: Revenge of the Fallen? It matters, you know. Now of course, a reasonable person is likely to reply that the gospel is the story Wicker is referring to, which is true. Why not, then, refer to “The Gospel-Shaped World”? Because, I submit, Story is a word to conjure with, as Wicker and Gottschall alike, in their very different ways, know. But it is time to stop conjuring.

You can feel some folks cheering along as Jacobs’ boldly deflates the “story” industry in Christian circles.  But I wonder if that might be a bit premature.  Let’s consider this a little more closely.

1. We need to sort out the different sorts of claims that are made about and for “story” in these discussions:

(a) There is an important difference between improvement claims vs. formation claims.  If some (perhaps Gottschall?) fall into the habit of regularly claiming that stories “improve” us, then Jacobs critique is right on the money.  However, I don’t usually run into specific claims about improvement; rather, I see people talking about the unique formative power of story/narrative–and that formation could be for good or ill.

(b) But even mere formation claims would still be guilty of another of Jacobs’ peeves about story conjuring: the very notion that “Story” is a category.  This is a bit of an odd critique.  There’s no such thing as “Story,” he seems to claim, only stories.  But all sorts of our concepts and categories encompass a vast range of instantiations–but we don’t thereby rule them out of court. (Wittgenstein makes the case for “fuzzy” concepts early on in his Philosophical Investigations.)  Categories and concepts like “poetry” or “nonfiction” or “fiction” seem to successfully name an array of phenomena that is at least as “vast and wooly” as Story.  The very fact that I can assemble a collection of stories already means that “story” is a functional concept.

But let’s grant that there’s a fair concern in the neighborhood here.  Then I wonder if we might introduce another distinction, between those who talk about “story in general” vs. those who are really interested in narrative meaning.  For example, like Jacobs, Kramnick is very critical of those “literary Darwinists” who just keep making vague, general claims about “Story” without any attention to the specifics of particular stories.  (He also notes that the overarching Story that they seem to find turns out to be a version of Darwin’s story.)  Again: fair critique.  But that seems different from those of us who are not appealing to “Story” as if there was an abstract plot in the sky, but are rather attentive to the dynamics of storied meaning-making–the unique, irreducible way that narrative “means.”  This was the quarry of Paul Ricoeur’s ongoing research. It is also this kind of claim that Christian Smith is making when he argues that humans are “narrative” animals (in Moral, Believing Animals).  The point is that story means in unique, identifiable, and irreducible ways. So “story” does something that other modes of prose or expression do not.  (I argue this in more detail in Imagining the Kingdom.)  Jacobs might still want to contest such a claim, but I don’t think it falls prey to the critique he offers in “Just-So Stories.”

2. Now look again at Jacobs’ specific claim about Christian conjurings of the magic of “Story.”  First, Jacobs tells us “Christians have been guiltier than most” in this regard.  Really?  I find that hard to believe, especially if you’ve had any opportunity to spend extended time in the growing literature of evocriticism.

But second, and more importantly, look closely at the specific claim he attributes to this Christian version of story-conjuring.  Apparently their claim is that “people love stories because they are responding to the story God is telling through salvation history.”  Again: really?  I’m surprised to hear this, since I’ve spent quite a bit of time in this literature, and I don’t know that I’ve ever heard that argument.  And the only evidence Jacobs gives us is an appeal to a 1975 book by Brian Wicker.  If Christians have been “guiltier than most” on this score, you’d think there’d be loads of examples to cite–and maybe a few more recent.  But no.

So I’m worried that Jacobs has erected (conjured?) something of a straw man (a wicker man?).  If Christians were making the argument that Jacobs attributes to them here, then yes: this is a valid concern and critique.  But I’m not at all convinced that the recent spate of works emphasizing “story” are making anything like this argument.  That doesn’t mean they should therefore get a free pass; only that they can’t be dispatched on the basis of Jacobs’ complaint here.  That would have to be a tale for another time.