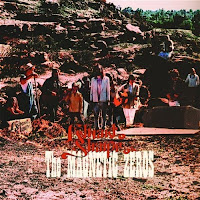 I have to thank my brother-in-law, Luke, for putting me onto a new favorite: Edward Sharpe & the Magnetic Zeros, specifically “Up from Below” (get the deluxe version with bonus tracks and video if you can). What whimsical profundity; what lighthearted sobriety; what cheerful terror; what enchanting haunting! Their sound emerges from a delightful array of playful musicians: they sometimes have the expansive crisp brass sound of a big band; at other times it’s the simple plunk of what sounds like a toy guitar. But it’s the vocals of the male and female leads that are most captivating.

Their sound is complemented and enriched by lyrical content that should not be missed. Indeed, sometimes there is a tension or dissonance between the sound and lyrics such that the accessible pum-pum-pum of the instruments might trick you into ignoring what’s being sung, as in “Up From Below” which opens with sheer vulnerability to the abyss:

I was only five when my dad told me I’d die
I cried as he said son, was nothing could be done
No all the fists I thrown just tryin to prove him wrong
After all the blood I spilled just tryin to get killed

There are also some wonderful tunes that can only be described as “love songs,” for lack of a better word, including “Jade” but most especially, “Home”–a beautiful, playful paean to true love, with almost campy rhymes that can only be appreciated when you hear them sung in sheer joy:

This also includes a “talking” interlude on the album which is reminiscent of some of Johnny & June’s banter in songs like “Jackson.”

But then the album also includes sorrowful songs like “Brother” in a mournful tune which is almost oppressive because the tune itself (a sort of calypso dirge) seems to be fighting to retain any shred of hope:

Somewhere over the earth
A song, a song
Somewhere I have heard
My brother is gone
Away, under the moon
Brother, brother
Away, gone so soon
Please singin his tune
Still singin his tune

Some say I am to blame
Brother, brother
Some days I fell the same
And feelin that shame
Away under the moon
Brother brother
Away gone so soon
Please singing this tune
Still singing his tune

I border on being mesmerized by the band. If you really want to be hooked, watch them in the studios of Santa Monica’s famous KCRW, performing “Home”: