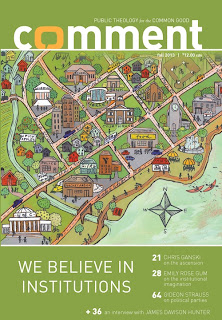 I’m very excited for people to read the Fall issue of Comment magazine, devoted to the decidedly un-hip theme, “We Believe in Institutions.”  If you subscribe by Monday, September 9, you’ll be assured that your subscription will begin with this issue.

And, lo and behold, we’re also having a summer subscription sale! So seriously, what are you waiting for?

The issue is rich and diverse: a feature interview with James Davison Hunter, articles on the institutional imagination, the role of the institutional church in cultural renewal, reviews of two important books (Thinking Institutionally and The Institutional Revolution), and more.  We’re also debuting our new format that includes brand new features like “World View,” an annotated take on the contemporary scene.

You can check out the Table of Contents and read some samples from this issue, including my editorial.    Here’s a snippet from that:

For a boy growing up in Ontario, it was never a question: you’re going to play hockey. Though Embro was a village of only 600 people at the time, we had a new arena, a robust minor hockey system, and a long legacy of the sport encoded in our civic DNA. So at four years old, we all moved from the pond to the ice pad, donning the purple hockey sweaters that many of us wore until we were twenty.

This was also part of something bigger. You could count on neighbouring villages like Drumbo and Plattesville and St. George having minor hockey systems, all webbed together by the OMHA.

When you’re ten years old, you think this is just part of the furniture of the cosmos; something given, natural, and taken for granted—that Saturday morning clinics and Tuesday night practices are just part of the rhythm of the universe, as if when God said, “Let there be light,” the big klieg lights in the rafters of the arena also came on. You never really think about what sustains all this, and if you do, you just imagine some anonymous “them” holds it all together, a vague, distant “they” who are responsible for all of this.

But when you’re an adult you realize: this doesn’t just happen. That something as mundane and yet enduring as Embro minor hockey is not a given; it is an institution. It is only because it is sustained by communities. It is bigger than the people who inhabit it, but it also depends on the people who embody it. The “they” you never saw in your youth turn out to just be people like you who have taken the reins and taken ownership. We could only take minor hockey for granted because, in fact, each generation received it anew, owning it, tending it, reforming it, and passing it on to the next generation.

In this issue of Comment we proudly profess that we believe in institutions. It is part of our creed. The lilt of this profession carries echoes of The Creed in which we profess, “I believe in the holy, catholic church.” But that’s not theonly institution we believe in. We also believe in institutions like Embro minor hockey, the Hamilton Public Library, the Legislative Assembly of Ontario, Surrey Christian School, the Calgary Planning Commission, the United States Congress, and that quiet but powerful culture-making institution that is the family.

Read the rest, then subscribe to the magazine.  This is the conversation you’ve been looking for.