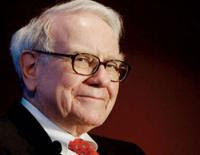 It is surely telling that Warren Buffett’s important editorial, “Stop Coddling the Super-Rich,” did not appear in the Wall Street Journal. Indeed, I find myself wondering whether it was floated there, then rejected. Wouldn’t that have been most conspicuous place for Buffett’s offing?

In any case, one wonders how the Tea Party ideologues in the Republican party–all those busy little e-traders with copies of Rich Dad, Poor Dad under their pillows at night–could possibly counter the logic of Buffett the investment guru. For here is the poster boy of a “job maker” debunking the myth that taxation frustrates investing. As Buffett succinctly puts it,

Back in the 1980s and 1990s, tax rates for the rich were far higher, and my percentage rate was in the middle of the pack. According to a theory I sometimes hear, I should have thrown a fit and refused to invest because of the elevated tax rates on capital gains and dividends.

I didn’t refuse, nor did others. I have worked with investors for 60 years and I have yet to see anyone — not even when capital gains rates were 39.9 percent in 1976-77 — shy away from a sensible investment because of the tax rate on the potential gain. People invest to make money, and potential taxes have never scared them off. And to those who argue that higher rates hurt job creation, I would note that a net of nearly 40 million jobs were added between 1980 and 2000. You know what’s happened since then: lower tax rates and far lower job creation.

Buffett’s entire editorial repays reading (and sharing). In it he documents the ridiculous exemptions from tax burden enjoyed by the super-rich–people who, as he puts it, “make money with money.”

But you’ll have to go to the New York Times to find it: not a word has been breathed about it at WSJ. Correction/update: Dieter Bouma pointed out to me that the WSJ blog is home to some discussion of this editorial.