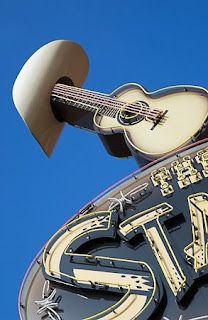 Rebellion is relative. For example, given what passes for “conventional” and status quo in our home, my 17-year-old’s rebellion takes the form of sympathy for the Republican party, a desire to major in business, and a passion for country music. He certainly knows how to push my buttons.

I’ll admit that I can partly understand the soft spot for country music. I was raised on the country music of the 70s–“when country wasn’t cool,” as Barbara Mandrell put it. It was also when country was “country & western,” though one could already see poppish sound making its inroads. But at that time, country stations still regularly played Patsy Cline and Hank Williams–and were the airwave home to Loretta Lynn, Tammy Wynette, Dolly Parton, George Jones, and Johnny Cash. Even the “next wave” of folks like Randy Travis were faithful to this tradition. (For a beautiful tribute to this earlier era, see Marty Stuart’s photo-essay, Country Music: The Masters–at the top of my wishlist.)

But the “new country” of today seems to me something different. And it is a catalyst for daily squabbles between me and my son: as soon as we hop in the car, his finger goes for the pre-sets on the radio, clicking one of the three local country stations. I try to tell myself that this is not a battle worth having–that this is a kind of adolescent “expression” I can live with, like earrings and tatoos. But within minutes my blood begins to boil, largely because of the pervasive nationalism of today’s country. It’s as if Lee Greenwood’s “God Bless the USA” was a required template for all contemporary songwriting. Consider, for example, Brooks and Dunn’s rendition of “Only in America”:

Sun going down on an L.A. freeway
Newlyweds in the back of a limousine
A welder’s son and a banker’s daughter
All they want is everything
She came out here to be an actress
He was a singer in a band
They just might go back to Oklahoma
And talk about the stars they could have been

You can understand how, as a Canadian and a Christian, this identification of “the Promised Land”–and the attendant falsehoods about opportunity–are tough to take with my son crooning along.

What’s at issue, I think, is not so much what’s said as what’s left unsaid. For example, while I’ll admit that Rodney Atkins’ “It’s America” is an affecting ditty, its selective nostalgia is deceptive. Consider the idyllic picture being sketched in these lyrics:

It’s a high school prom,
It’s a Springstein song,
It’s a ride in a Chevrolet.
It’s a man on the moon,
and fireflies in June
kids sellin’ lemonade.
It’s cities and farms
and open arms,
one nation under God.
It’s America.

What really sticks in my craw is the second verse:

Later on when I got home
I flipped the TV on.
I saw a little town that some big
twister tore apart.
People came from miles around
just to help their neighbors out,
and I was thinkin’ to myself:
I’m so glad that I live in America.

Really? So people only help distraught neighbors “in America?” If you lived elsewhere, do you think, Mr. Atkins, that these folks would be left to their own devices? Any chance you think this vaunted American virtue of care for the neighbor applies to health care policy or public education? I didn’t think so.

Chorus
Give me a Saturday night my baby by my side
A little Hank Jr. and a six pack of light,
Old dirt road and I’ll be just fine.
Give me a Sunday morning that full of grace
A simple life and I’ll be okay
Here in small town USA

Look, I’m not out to demonize small towns (I grew up in a village of 600 people), but this simply doesn’t tell the truth. It is a nostalgic, selective picture that gives the lie to smalltown life, painting over its dark underside: the racism and exclusion; the narrow horizons and xenophobia; the cycles of poverty, unemployment, and hopelessness; and as Nick Reding has recently shown us, the spiraling cycles of substance abuse (see Methland: The Death and Life of an American Small Town). (And a story that remains to be told is the growing secularization of rural and smalltown America.) Far from being a “good ole” place, the small town can be one of the ugliest corners of American life–though this never makes its way into Thomas Kinkade paintings or Norman Rockwell pictures or “new country” songs.

As an Argentinian proverb puts it, “A small town is a vast hell.” That sounds like material for a real country song.