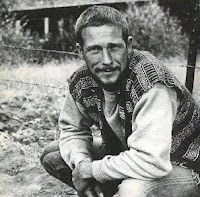 As you might gather from the synergy between Fors Clavigera and What I’m Reading, poetry’s been on my mind alot lately. Building on an emerging theme I noted elsewhere, Dana Goodyear’s recent New Yorker piece on sometime “Beat” poet Gary Snyder offers another catalyst for thinking about “poetic” truth, or poetic understanding (see “Zen Master” in the October 20 New Yorker).

The circle that included Snyder, Ginsberg and others were oral poets. This doesn’t mean that they subscribed to any “phonocentric” conception of poetry, as if spoken poetry was “truer” or “purer” than written poetry. It simply means that theirs were poems meant to be spoken and heard–they were created with the cadences of speech and orality in mind. When they were written, they were akin to musical scores. Nobody would confuse the score of Mahler’s Symphony No. 2 with its performance; and the score is meant to serve the performance. So too with oral poetry. Other (what–literate? textual?) poetry is meant to be read; it lives off the visuality of the graphemes, the marks and spaces on the page which often can’t be reproduced in recitation. In contrast, Snyder struggles to find a syntax for writing his oral poems; he has to stretch the forms in order to create a “score.” As Goodyear observes,

“on the page their forms are fluid, loose, irregular. Blocks of indented lines indicate a shift in voice, and often a slight conceptual change. […] White space in the middle of the lines is for a caesura more substantial than a comma or a semicolon; white space between stanzas allows time to elapse.”

This slippage between the written and the performed–and the irreducibility of the one to the other–also hints at different modes of understanding. As Snyder himself puts it,

“When people tell me they don’t understand a poem, I say, ‘Fine, just listen to it. The exposure to its is part of its power. Don’t vex yourself with an intellectual understanding of it.’ We don’t expect to understand graphic art that way.”