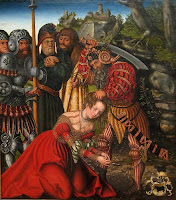 This week I was invited to give the homily in the Coram Deo chapel service at Indiana Wesleyan University, which I post below.

Is There Room for Martyrs in our Church?

I recently had opportunity to enjoy a kind of reverse “Grand Tour” in northern Italy—a very foreign territory for Protestants. I found myself impressed—even haunted—by images that constantly confronted me on this journey: images of martyrs. The Venetian empire just oozes with images of Catholic martyrs: Sebastian and Barbara, George and Perpetua.

What made me uncomfortable with the ubiquity of these images of martyrdom is that I seemed to lack the imaginative space to make room for martyrdom. Or perhaps I should just say that my imagination lacked triggers that could be activated by images of martyrdom, as if the semiotics of martyrdom were a foreign language in a script I couldn’t even make out. These images of witnesses (martureoi) who bore witness precisely by suffering for the faith are not part of the pantheon of Protestant saints that tend to populate our imaginative landscape.

I came away from this experience with a question: Is there room for martyrs in our church? Or, to put it a little differently: Do we North American evangelicals have space in our worldview to even make sense of martyrdom, let alone revere and celebrate it?

The tension, I think, is this: over the past several decades, North American evangelicals—especially evangelicals committed to colleges and universities—have steadily absorbed the idea that as Christians we are to be “transforming culture.” We see our commission as a cultural mandate to redeem “all things,” perhaps even to be “world changers.”

Now, don’t get me wrong: I do think God calls us to be engaged in the good work of culture-making. But I’m not sure that’s the same as “transforming culture” or “changing the world.” The reason is this: it seems to me that when Christians get hooked on “transforming culture,” it often turns out that the transformation goes the other way. In particular, I think that when we see our mission as transforming culture or changing the world, we end up thinking that the church is out to win. We slowly but steadily become a people who are bent on “outcomes,” on “success,” on winning a culture war. And what we don’t realize is that, slowly but steadily, it’s the world that’s changing us into people who are “purpose-driven” just like the rest of our success-driven world.

And in that world, martyrs are just losers. Because let’s be honest, from the perspective of the ambitious project of renewing “all things,” “transforming culture” and “changing the world,” martyrdom represents a pretty stark failure. Somebody must have dropped the ball on transforming the structures of society if Christians are being executed. Has our penchant for renewing “all things” unwittingly made us allergic to failure?

Room for the Cross?

So what concerns me is not only that there isn’t room for stained-glass depictions of martyrs in our puritanical worship spaces. Even more importantly, there doesn’t seem to be room in our theological imagination for martyrdom. Our “worldview” seems to lack a place for a faithfulness to the scandalous radicality of the Gospel—the sort of faithfulness that gets you killed. Instead, we come up with scaled-down, comfortable versions of a “personal relationship with Jesus” that won’t upset the status quo very much—as if Jesus’ kingdom was just the best version of the American dream. As if embracing Jesus was just the best way to become a “success.”

But if our churches don’t have room for martyrs, then they don’t have room for the cross; they won’t have room for Jesus. Was Jesus a “cultural transformer?” A “world changer?” Was Jesus a “success?” Is execution a success? I think Jesus is, in fact, our exemplar of culture-making—but he also shows us that engaging in cultural labor is not a matter of cozying up to the powers-that-be. Faithful cultural labor isn’t looking for ways to get Faith in the Halls of Power (Lindsay). If that were the case, the Son of God would have been born to the Emperor. But he wasn’t—he was born in a stable to a family from the other side of the tracks.

And Jesus’ culture-making didn’t lead to the “transformation of culture”—it led to his execution, precisely because the kingdom he announced—the kingdom into which he calls us—will always scandalize the powers. As N.T. Wright provocatively puts it, “Jesus determined that it was his task and role, his vocation as Israel’s representative, to lose the battle on Israel’s behalf. This would be the means of Israel’s becoming the light, not just of herself…but of the whole world.”[1] If our vocation is to “follow Christ” as the way to take up our human vocation to be God’s image bearers, then our image bearing should look the same. “When we speak of ‘following Christ,’” Wright cautions,

it is the crucified Messiah we are talking about. His death was not simply the messy bit that enables our sins to be forgiven but that can then be forgotten. The cross is the surest, truest, and deepest window on the very heart and character of the living and loving God… And when therefore we speak […] of shaping our world, we do not—we dare not—simply treat the cross as the thing that saves us “personally,” but which can be left behind when we get on with the job. The task of shaping our world is best understood as the redemptive task of bringing the achievement of the cross to bear on the world, and in that task the methods, as well as the message, must be cross-shaped through and through.[2]

We are a kingdom people just to the extent that we make room for martyrdom, make room for the cross. We should be a people for whom martyrdom doesn’t take us by surprise. I don’t mean the faux martyrdom of people like Sarah Palin who invent tales about their persecution despite all the while serving the god of the status quo that knows nothing of the scandal of the kingdom. I mean a commitment to the scandal of the kingdom which recognizes that faithfulness does not look like success, does not look like winning. Indeed, more often than not, it will look like losing. We make room for the cross just to the extent that we’re willing to lose.

Saint Stephen shows us that martyrdom is inscribed into the very DNA of the church, this called-out people who are called to embody the coming kingdom in our worship of a crucified King. This is also why the advent of the kingdom pictured in Revelation 20:4 comes with the picture of “those who had been beheaded for their testimony to Jesus.” They were martyred precisely because “they had not worshiped the beast or its image and had not received its mark on their foreheads or hands.” I fear that we have become a church with no room for martyrs precisely because we’ve become a church that’s taken the mark of the beast in our devotion to wealth, power, and military might. May the God who makes room for a persecutor like Saul also have compassion on us, grab hold of us on our Damascus roads, and show us what it looks like to be the church of Saint Stephen.