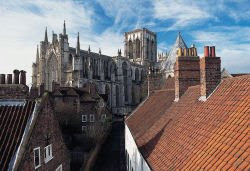 Greetings from delightfully medieval York! Now into our second week here, our family is beginning to settle in for our five month sojourn here as I’ll be directing Calvin College’s Semester in Britain program, based at York St. John University. I’ll be teaching a course on “Victorian Britain and Postmodern Culture,” considering four 19th-century movements as anticipations of later ‘postmodern’ movements or themes: the Oxford Movement, the Pre-Raphaelites (as well as Ruskin and William Morris), Christian socialism (associated with F.D. Maurice and others), and the “aestheticism” of Walter Pater and Oscar Wilde. It is an entirely indulgent course and I can’t wait to dive into these materials. I’ll also be directing a course on Studies in British Culture which centers on excursions around York and Britain, with reflection from texts by Edmund Burke, George Orwell, Roger Scruton, and others.