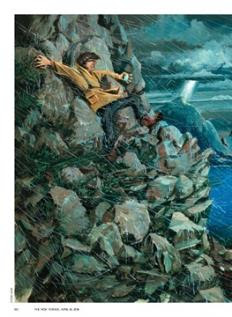 I worry that all the hoopla of David Foster Wallace, Inc. is going to overwhelm serious discussion of his work, generating a backlash against the media-constructed image of DFW as the saintly martyr for the cause of “the novel.” One of the worst outcomes of such a juvenile, anti-trend backlash would be the dismissal of Jonathan Franzen’s New Yorker essay, “Farther Away.” Indeed, here’s a piece doomed to double-disdain: yet more about Wallace, and now from mega-selling literary phenom, Franzen. (Even the cynical, however, might appreciate Karen Green’s recent interview in the Guardian.)

Granted, Franzen’s essay is a bit of a set piece, recounting his retreat to the desolate Alejandro Selkirk island off the coast of Chile–named for the Scottish adventurer who is the likely basis of Daniel Defoe’s Robinson Crusoe. So here we have Franzen, burned out on the book tour from his best-selling Freedom, retreating alone to the isolation of this island with a paperback copy of Robinson Crusoe in his backpack. This is the sort of thing writers do only so they can write about it.

But Franzen is also trying to find space to mourn the death of his friend, David Foster Wallace. And so the essay intertwines three threads: his adventure alone on the island, his attempt to come to grips with the death of David (including both lament and anger), and his meta-reflections on the history and task of the novel, very much continuing his famous thesis in How to Be Alone: that fiction is a response, and antidote, to loneliness (a thesis he shared with Wallace). On all three counts, Franzen is worth reading.

Particularly poignant and insightful are Franzen’s reflections on love in the corpus of DFW. On the one hand, he notes its absence from Wallace’s fictional worlds: “Close loving relationships, which for most of us are a foundational source of meaning, have no standing in the Wallace fictional universe.” On the other hand, “[t]he curious thing about David’s fiction, though, is how recognized and comforted, how loved, his most devoted readers feel when reading it.”

That sounds exactly right to me. But I would ratchet this up a notch, too: it’s not just that Wallace’s readers feel loved because of his vulnerability and honesty. I think one could also argue that despite all of their addictions and “hideous” characteristics, Wallace also loved his characters. Indeed, I think this is precisely what distinguishes Wallace from Franzen. This is one the things that struck me while reading Freedom: it is a masterful work, but I found it difficult to generate sympathy with any of the characters, and it struck me that this is because Franzen doesn’t really care for Patty or Walter or Joey or any of the others either. While Wallace and Franzen are often mentioned in the same (postmodern) breath, associated with hyper-self-consciousness, “meta”-izing fancies, and cynical distance, in fact they’re quite different. Franzen ended up settling for quite a straightforward narrative strategy, but his stories ooze with cynicism. In contrast, while Wallace was every bit the pomo formalist, indulging in all kinds of “non-linear” tricks and gimmicks, what emerges through that is not cynicism, but something quite different: a sensitivity and understanding for the messed up worlds of his characters that might just be love.