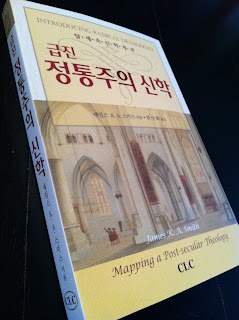 I just received copies of the new Korean translation of Introducing Radical Orthodoxy: Mapping a Post-Secular Theology, first published in 2004. It is available from CLC Korea.

The Korean cover basically reproduces the cover design of the first English edition. However, subsequent print editions of the English book have a slightly different cover since the Getty Museum, home of the Saenredam painting featured on the cover, stipulated that no text could be superimposed on the image. Go check your edition of Introducing Radical Orthodoxy now to see if you have one of the early collector editions! (Not.)
This new book will soon be joined by Korean translations of Letters to a Young Calvinist and The Fall of Interpretation: Philosophical Foundations for a Creational Hermeneutic. (And stay posted for news about a forthcoming second edition of The Fall of Interpretation from Baker Academic. More soon.)