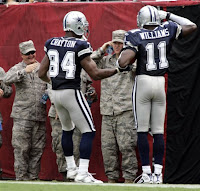 Al Mohler’s post on Thanksgiving reminded me of something that struck me this past Thursday. “Giving thanks,” he rightly notes, is a theological act. Indeed, isn’t it interesting that at the heart of Christian worship is a meal which is itself indexed, even named, by this act: the eu-charist is a “thanksgiving,” and at the heart of this theological practice is a prayer of gratitude:

Let us give thanks to the Lord.
It is right for us to give him thanks and praise.

So Mohler notes how odd it is to give thanks without recognizing a Giver. Odd, but not surprising, since the same was noted by Paul: “they did not honor Him as God or give thanks” (Rom. 1:21).

I had been thinking about something similar, but with a different analysis. “Giving thanks” is a transitive verb that requires an object (person) to whom one is grateful. As I spent more hours than I should have watching football (a coy way to escape the mother-in-law), it struck me that NFL programming came up with a substitute–the American military. Indeed, all three NFL broadcasts were run like a Memorial Day ceremony. On this re-interpretation of Thanksgiving, we, in our “blessed” nation, end up being thankful to military might.

So while some try to give thanks without a Giver, others give thanks to another giver: the “chariots and horses” of military might (Ps. 20:7), which is no less idolatrous.