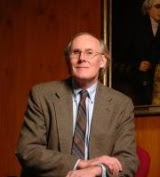 [Update: My apologies that the original feed listed the dates as 1950-2005; I inadvertently plugged in Grenz’s dates.]

Many of us have intellectual debts that never surface, as it were. They are not the sorts of debts that one could track in the footnotes of our work. They are more submerged and subterranean than that. Such debts are often accumulated early on in one’s formation; indeed, they are often catalytic influences that impacted us in a malleable, impressionable period when we were just beginning to think that theology or philosophy was our calling. And because we so often look on our younger selves with such “enlightened” disdain, we are–if we’re honest with ourselves–often just a little embarrassed by these influences since we think we’ve “outgrown” them. And yet, without them, we wouldn’t be who we are.

We are often awakened to such debts in tragic situations. When Stanley Grenz died so young (already five years ago?), I was reminded how much I owed to him, recalling the really pivotal experience of reading his little book, Revisioning Evangelical Theology, during my first year of graduate school. One would never guess from the footnotes of my books how much this little book set an agenda for my career. (This is partly why I was happy to endorse Steven Knowles’ recent study, Beyond Evangelicalism: The Theological Methodology of Stanley J. Grenz, which begins to give Grenz his due.) Donald Bloesch is another figure who actually plays a towering role in my early formation, though I don’t think anybody could know that from the written record.

The sad news of Clark Pinnock’s death is a similar reminder and wake-up call to what I owe.

I first encountered Pinnock’s work while at Bible college, specifically his early apologetic work in The Scripture Principle. I then recall a symposium on contemporary theology in Christianity Today, right around the same time, that featured him as a “progressive voice,” and I found myself listening to him carefully. (I think the fact that he was Canadian also gave me a sense of implicit camaraderie.) While my professors were railing against him as a “liberal” (a charge that looks laughable from where I now sit!), I found in him a theologian willing to go where the truth led, rather than someone who felt compelled to think the same thing for 40 years. This spirit of faithful curiosity and disciplined exploration was captured marvelously in another book that impacted me more than I might want to admit: Barry Callen’s intellectual biography, Clark Pinnock: Journey Toward Renewal. Callen painted a picture of a Christian thinker characterized by both humility and courage–a model that became iconic for me. Clark Pinnock was one of the saints.

I was especially encouraged that he was willing to follow the Spirit into foreign territory, and as I was making my pilgrimage to the pentecostal tradition, I remember hearing reports of Pinnock’s visits to the renewal happening at Toronto’s Airport Vineyard–a sure sign to other theologians that Pinnock had gone over the edge. But the fruit of his pilgrimage was Flame of Love: A Theology of the Holy Spirit–a book that quite simply gave me hope.

While Pinnock and I would disagree on all sorts of matters, I’m grateful for his model of courageous, faithful curiosity in the service of Christ.