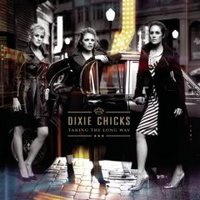 My wife proved herself a prophetess last night. Despite the prognosticators, she confidently proclaimed that the Dixie Chicks would be winners at the Grammy’s–though I don’t think she envisioned them winning 5 awards (in every category for which they were nominated).

There is, of course, a sweet irony about this. This trio that won “Best Country Album” has not received an iota of country radio airplay time because they dared to be critical of the unmitigated militarism of the current administration. And these same Chicks that won five Grammy’s (!) did not receive a single award at last fall’s Country Music Awards.

We have been DCX fans since the beginning and enjoyed seeing their tour’s kick-off show in Detroit last summer. (Who launches a country tour in Detroit?!) While I wish they were a tad more elegant about this last night, I’m happy that their work has been vindicated in this way. Don Henley was just downright giddy about the Dixie Chicks last night. (Alot of folks have noted that the Chicks’ album, Taking the Long Way, has 70’s-ish Eagles-like echoes.) When Don Henley is in your corner, it makes morons like Toby Keith look even smaller.