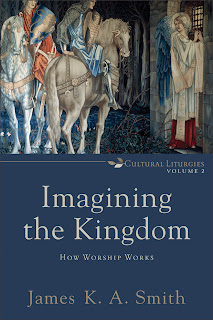 I received an early Christmas present when I realized that John Wilson and Stan Guthrie were discussing my new book, Imagining the Kingdom: How Worship Works, in this week’s Books and Culture podcast.  (You can also listen/subscribe to the podcast on iTunes.)

John does a great job of situating the new book–which will be available in late January–in the context of my argument in Desiring the Kingdom.  He does so by focusing on my admission, in the Preface to Imagining the Kingdom, that DTK was a “hypocritical” book–a long theoretical argument for displacing the centrality and primacy of the intellect.  Addressing that concern and dynamic is a big part of volume 2.  (And in the Preface I do so by drawing on Proust–but you’ll have to get the book to see how that works!)

I was intrigued (and humbled) by John’s discussion of the reception of Desiring the Kingdom as a kind of retroactive confirmation of the book’s argument.  At first he was skeptical of my claim about the privileging of the intellect among evangelicals.  Indeed, per The Scandal of the Evangelical Mind, John was inclined to think the very opposite: our problem hardly seemed to be a matter too much thinking.  And yet, as John noted the wide reception of the argument over the past few years, he wondered whether the claim was on to something.

I get at this problem right in the Preface of Imagining the Kingdom.  At one point I articulate it this way:

The point, rather, is that we have a tendency, in Christian higher education and even in the church, to overestimate the importance of thinking. Now, many of those toiling in the not-so-ivory towers of Christian colleges and universities would be quite surprised to hear that thinking is being overvalued in North American Christianity. Indeed, quite the opposite seems to be true: evangelical piety tends to intensify a general anti-intellectual malaise that besets our culture. The response to such a situation would be to encourage more thinking, not less—to emphasize the importance of the mind rather than fall back into the soppy mushiness of “the heart” and its affections. In short, with its critique of rationalist or intellectualist models of the human person, it would seem that Desiring the Kingdom plays right into the hands of antiintellectualism (p. 11).

So I completely understand John’s worry here. But note that one of the goals of Imagining the Kingdom is to respond directly to this worry.

This gets at one of the most nuanced–and admittedly perplexing–parts of the argument: that those Christians who are “anti-intellectual” are sometimes the most ardent proponents of intellectualIST pictures of the human person.  Those who are suspicious of the university and “book learnin'” are often still “folk” intellectualISTS who think discipleship and sanctification are a matter of information rather than formation.  Whenever sanctification is conceived primarily as a matter of acquiring biblical knowledge–with no account of the importance of habit–then we are on the terrain of intellectualISM, even if we’re talking about a community that looks askance at something like Books & Culture, which is rightly pointing folks to the riches of intellectual reflection.

But I’m getting ahead of myself.  I hope you’ll listen to the podcast.  And if that piques your interest, I hope you’ll pick up Imagining the Kingdom in the new year.