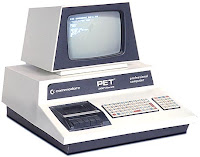 I think we’re seeing an interesting phenomenon in theology as a generation of “digital natives” begin to emerge in the theological academy. Most of us who have published in the field, and I would think the majority of tenured professors, are “digital immigrants”: we’ve grown along with digital technologies, but we can still remember a world without it.

For example last night, one of my sons (who’s a sophomore) was studying for a “Computer Apps” exam and asked me how to do a “mail merge.” “I have no clue,” was my reply. “What do you mean?,” he asked. “You work on a computer all day long.” “Yes,” I responded, “but I only know how to do what I need to do–type.” We then strolled down memory lane and I shared with him my recollections of a “computer class” where we filled out bubble-cards that we fed into some gargantuan machine in order to get it to say, “Hello” over and over again. I remember the emergence of Commodore PETs in our “computer room” at high school, and I vividly recall getting a Commodore Vic 20 in our basement, with its cassette-tape storage system. We later graduated to a Commodore 64.

But when I was in college, I still wrote my papers on a typewriter.

So I’m a digital immigrant, as are most of my peers and mentors. But the next generation of theologians are digital natives, and that reality is beginning to be felt in the theological guild–particularly in the role that the blogosphere plays in contemporary theological discourse. While there’s all sorts of flippant, heart-on-sleeve religious blogging, there are also serious, rigorous theological conversations that are conducted in the blogosphere. Granted, I think digital natives perhaps overestimate the significance of the theological blogosphere: given its selectivity and less-than-representative participation, it’s easy to confuse a “hot” topic or book in the theological blogosphere as if it were “hot” in the theological academy more widely. So the blogosphere is prone to a bit of myopia and over-estimation. However, that doesn’t mean there aren’t significant conversations happening in the theoblogical sphere, and I suspect we’ll start to see this affect the shape of wider discourse in the guild. (No tweeting yet, thank heavens!)

For a recent example of what I’m talking about, consider the theological energy generated by the essay, “Kingdom-World-Church: Some Provisional Theses,” co-authored by Nathan R. Kerr, Ry O. Siggelkow, and Halden Doerge. In addition to generating over 120 (mostly serious, thoughtful) comments, within just a few days it has also spawned responses at An und für sich, The Fire and the Rose, The Other Journal, and my own response at The Church and Postmodern Culture (along with another by Geoff Holsclaw). For the most part the tone has been constructive but forthright, illuminating and helpful. A good example of what the theological blogosphere could be.