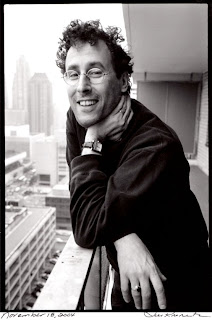 Last spring when I was in New York I had really hoped I could score tickets to Tony Kushner’s play, The Intelligent Homosexual’s Guide to Capitalism and Socialism, but didn’t.  (Most will know Kushner from Angels in America.) Especially for someone like me, who’s sympathetic to voices like Ross Douthat and Charles Taylor and John Milbank, it’s important to hear a very different sort of critique of our present–the sort of diagnosis of modernity that ripples across Kushner’s oeuvre.

The interview with Kushner in the latest issue of The Paris Review only confirmed this sense for me.  It is a conversation sparkling with insight, sounding existential depths.

Indeed, one of the things that struck me is how often Kushner’s take on drama echoes Augustine’s account of drama (which I’ve discussed elsewhere)–except that they have very different evaluations of what’s at issue.  Consider, for instance, Kushner’s reflection on how writing differs from acting:

When I’m writing a new play, there’s a period where I know I shouldn’t be out in public much. I imagine most people who create go through something like this. You will fully loosen some of the inner straps that hold your core together. You become more porous and multivalent and multivocal, so that the multitudes you have inside yourself can start to get up and walk around and emerge. Then, hopefully, you put them back into the cave.  But to really play Linda Loman, you have to go there every night.  So you live in a state, I would imagine, of permanent looseness in the core, which I find frankly terrifying (pp. 116-117).

That’s exactly what terrifies Augustine about the stage in Book III of the Confessions: the actor so regularly divests the self of a center and identify–so regularly fragments and dissipates the self (the chief effect of sin, for Augustine)–that Augustine worries there’s no return.  This is the great danger for actors.  And Kushner recognizes the danger. He’s not willing to go there himself, but also thinks that actors are those brave souls who have the courage to risk themselves in this way.

But then, interestingly, Kushner unwittingly hits on Augustine’s concern for theatre-goers.  Kushner again:

Sometimes a phony-baloney actor will hoodwink the public for decades, but the actors we really rever aren’t kidding around when they act. They suffer. PArt of what we are paying to see when we go to the theater is suffering. We want to see actual suffering. There’s a certain Christ-like thing going on–the actors are suffering so we don’t have to (p. 117).

I’m not interested in the “Christ-figure” bit; I’m intrigued by Kushner’s claim about theatre-goers: we don’t suffer; we merely observe suffering.  Once again, this is one of Augustine’s central concerns in Book III: the play engenders emotion in us, but not real suffering (it’s not happening to us), and not sympathy other (we know they’re acting). So we go to enjoy suffering (and if you know anything of Augustine’s use/enjoyment distinction, you can imagine how perverted he thinks this is.  I’m not saying he’s right, just that there are these intriguing parallels with Kushner’s take).

This leads Kushner into a nuanced, philosophical discussion of the productive tensions between realism and fantasy on the stage.  Drama, he contends, remains that unique genre where the audience has to be in on the joke–we have to wink in return when we see the director wink at us off-stage, because you can’t hide the curtain and you can’t not hear the stage crew moving props around and you can’t get lost in a totalized fantasy world like you can in the cinema. (Kushner launches into a fascinating critique of our erotic relationship to technology on this point insofar as technology tries to hide its human origins, the fact that it’s made.)

Kushner points to one of his key influences on this point:

Brecht says the point of theater is, among other things, to make you conscious of this disappearing trick.  That’s why he used a half-curtain in his productions, with the audience watching one scene being played out in front of the curtain and, behind it, the next scene being prepared.  As he wrote in one of his theater poems, let people “see that this is not magic, but work, my friends.” His most famous, and most misunderstood, idea about staging is what he calls the distanciation effect–he wants theater to enable you to see the familiar as strange and the strange as familiar, so that you greet reality with an appetite to interpret it (pp. 118-119).

This is why Kushner thinks drama can have such a critical function in society, without devolving into mere tracts and propoganda.  It gets us to question our reality.  “The incomplete, imperfect illusion will never be unnecessary for human beings,” he concludes, “and its home will always be in the theater, where everything, including death, is simultaneously thoroughly and yet not entirely convincing.”