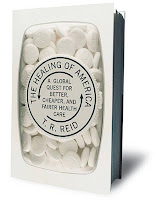 Yesterday kicked-off Calvin College’s annual January Series–three weeks of free, noontime lectures by a wide variety of authors and experts. Over its two decades it has become a Grand Rapids institution–the brightness of a little liberal arts education crammed into the dreariness of west Michigan winter. And anyone in the world can listen live on the web.

This year’s series started with a bang: journalist T.R. Reid speaking on “The Healing of America: A Global Quest for Better, Cheaper, and Fairer Health Care,” also the title of his bestselling book. (You can listen to the archive online.) Reid’s work is everything Michael Moore’s is not. Based on several years of international exploration of different healthcare systems around the world, Reid summarizes a taxonomy of 4 different models–and then points out that all 4 are operative in the United States. So if you have employer-based insurance, you live in Germany; if you have Medicare, you live in Canada; if you’re a Vet, you live in Britain; and if you’re none of those, you live in Angola or Nepal.

His core question isn’t whether we could have universal healthcare in the U.S., but why don’t we? Definitely worth a listen, and the book is worth reading.