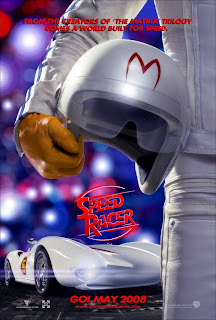 Last night my boys and I watched the Wachowski brothers’ latest offering, Speed Racer. I quite enjoyed their (perhaps indulgent?) visual forays, variously hovering between surreal and camp. (I confess to also kind of enjoying the cheap chimpanzee comedy shtick.) But I also found myself strangely intrigued by a melodramatic, almost cliche line uttered by Racer X to Speed:

“It doesn’t matter if racing never changes. What matters is if racing changes us.”

The context is the corporate corruption of the WRL, which is rife and systemic. It has always been this way, and Speed despairs that it might always be. And it’s not clear that winning within the system will really change the system. But at the same time, X and Speed both have a compulsion to race, and that compulsion can only work itself out within the system. (One might say that the corrupt system owns all the tracks.) So given that context and compulsion, the question becomes an issue of assimmilation: “What matters is if racing changes us.” Now, granted, this could sound like a kind of Stoicism. But I don’t think it is, because Speed and the entire family are trying to imagine racing otherwise–and are trying to embody a different kind of team, and different kind of racing, and different kind of practice within the corporate system. But if Racer X is right, one doesn’t necessarily work out this impulsion in order to “transform” the system (“It doesn’t matter if racing never changes.”).

So this got me thinking a bit (and I’m very much thinking out loud here): How much of the Reformed agenda of “transforming” culture is secretly–and perhaps essentially–informed by a kind of myth of progress? To what extent does the “transforming culture” agenda have to assume that “racing can change,” so to speak? And is that warranted?

In re-reading Kuyper recently, I was astonished (one might say appalled) to see his shameless 19th-century progressive confidence in “the West” (all thanks to Calvinism, of course). (How much of this is due to an implicit post-millenialism of some sort?) In general, I think Reformed “transformers” assume both the “racing can change” and “racing will change,” to stick with the filmic metaphor.

But I just wonder: is that warranted? On what grounds? (I should note that even if it’s not warranted, that doesn’t thereby entail the truth of some dispensationalist pessimism about creation and culture per se, as if everything but the soul is just destined to “burn up.”) What can we expect from “the earthly city?” (Nota bene: Augustine’s “earthly city” is not synonymous with creation or temporality; it’s origin is the Fall.) I suppose I find myself with little confidence in any “progress” in the earthly city apart from eschatological renewal and transformation. And within such a system, what matters is that “racing” not change us.