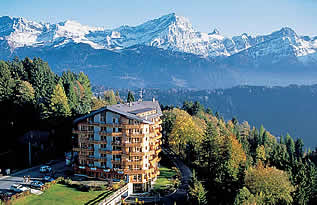 I just got back from my stroll up the mountain to Villars– perhaps one of the most enjoyable things I’ve ever done. Trying to put it into words reminds me of negative theology and the utter inadequacy of language.

The path from L’abri begins wending through a hillside meadow that spills out into the sprawling valley below, pinched between the towering heights of the alps. It then dives into the forest, crunching past trickling streams everywhere. Indeed, the whole mountainside was bubbling with water as the mountaintop snow gives way to spring and looks for the best path down to the valley. The trickling streams eventually give way to a teeming springtime flow closer to Villars. The soundtrack for the trek included birdsongs I’ve not heard before as well as the gentle clanging of a lone cow grazing.

I stopped at the Coop in Villars for my prey: as much Swiss chocolate as my suitcase can carry, as well as Smarties for the kids. (Not those icky American sugar tablets, but rather the real deal we enjoy in Canada.) Not all of the chocolate will make it to my suitcase: On the way back down the mountain, I stopped at a bench on the trail and enjoyed half a bar, sitting under a pine tree, with the sun stealing through in spots, and the snowcapped mountains continuing to impose themselves through the branches. (If I had a corkscrew, I don’t think the wine I bought would have made it down the hill either.)

The whole experience reminded me of some Ricky Fitts confessed in American Beauty: “Sometimes there’s so much beauty in the world, I feel like my heart is going to cave in.” Grace à Dieu.