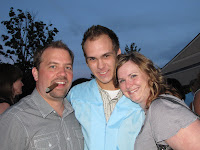 Last week our oldest son graduated from high school–one of the few remaining ritualized rites-of-passage in American culture. I have no profound insights to share, but the occasion has had me thinking about two things:

First, all the clichés are true: “They grow up so fast.” “It seems like only yesterday that you were getting on the bus for kindergarten.” “I still feel like a kid myself.” &tc. I think this affirmation of cliché is one of the great themes in David Foster Wallace’s corpus, especially in Infinite Jest, but also in the posthumous stories and essays that have appeared since his untimely death. We have a tendency to identify something as a cliché in order to dismiss it, whereas in fact clichés have the force they do precisely because they are the remnants of proverbs that stand up across generations of experience. In a way analogous to Kurt Cobain’s famous quip, “Just because you’re paranoid doesn’t mean they aren’t after you,” so too: Just because it’s cliché doesn’t mean it’s not true. We’re still reeling from the experience of what generations of parents have discovered, uttering those phrases which have become our cliches.

Second, I have a new appreciation for our risk-taking God of love. As our oldest prepares to set out from the nest, so to speak, we have a profound sense of our limits and finitude (and a new appreciation for prayer!). And in what is probably a heretical analogy, I can’t help thinking of that creational picture as an analogue: When God creates the world, he takes the risk of entrusting its care to humanity. He lets go. He made room for mistakes. He gave way and gave over his creation to imperfect creatures. He didn’t abandon them, but neither did he keep them tethered to marionette-like strings of control (their fall was evidence of that). Love takes risks, love makes room, love gives way, love lets go–even when that means commissioning the beloved at the risk of failure. Our acquired penchant for control and safety does not sit well with such risk-taking. But such risk-taking is the flipside of trust, the flipside of faith. Thus even our love-endued risking cannot be unhooked from hope. And so even for fretting parents perched on an unfamiliar precipice, these three remain: faith, hope, love.

[I should say just one word about the cigar in the photo above! One of the traditions at our Christian high school is for the graduating seniors to emerge from the graduation ceremony, gather together, and enjoy a stogie–a little bit of ritualized transgression. In this photo Dad’s just trying to show the lad how it’s done.]